“I love the wild country,” says Michael Hoffman, an artist craftsman who grew up in the foothills of the Yarra Valley and always wanted to be near the bush. Today his life and work are intimately connected to the Blue Mountains he has called home for more than ten years. In addition to having a firmly established business, his two daughters are growing up here. A visit to Michael’s wood and metalworking studio in Lawson demonstrates his deep roots in the mountains community, as it is impossible to imagine even attempting to pack up the great machinery and wood stockpile that he has collected over the years. 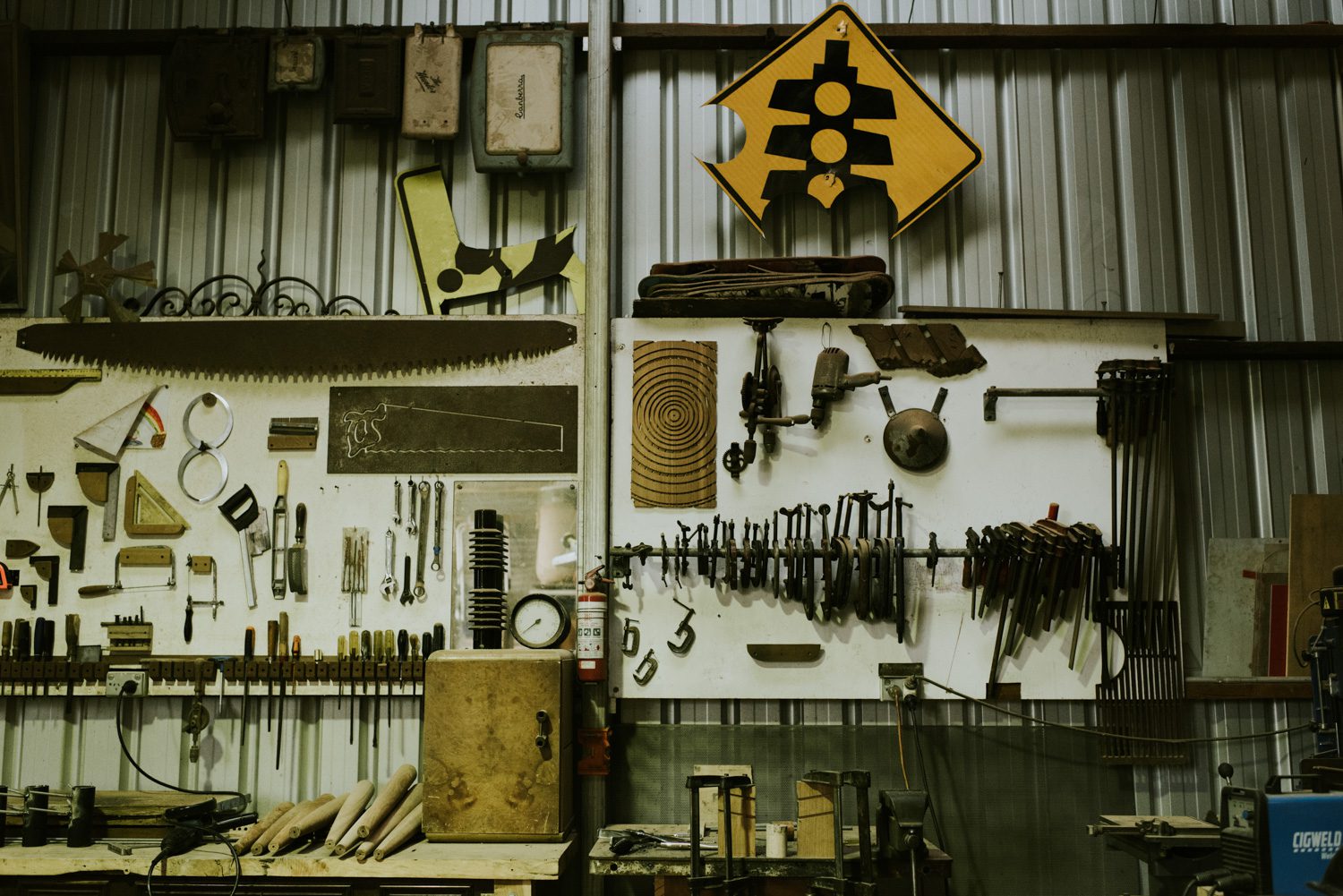 His studio is a portal to a fascinating world full of warmth and sawdust. It is welcoming, functional and almost museum-like in its orderliness, and ever so slightly overwhelming in its scale. Among industrial sized drills and saws, well-worn workbenches and hand tools, lie interesting objects waiting to be uncovered. A small door from a vintage oven, or sheets of gnarled and twisted timber that Michael has discovered in his travels, all kept for a yet unknown future use.

Michael’s first significant influence in the world of woodworking was his grandfather. “He was a welder and boilermaker, a very practical man who could make just about anything. He used to just pick things up on the side of the road and make things for us grandchildren or people on his street. That’s influenced me a lot. I pick stuff up from the side of the road now too.” 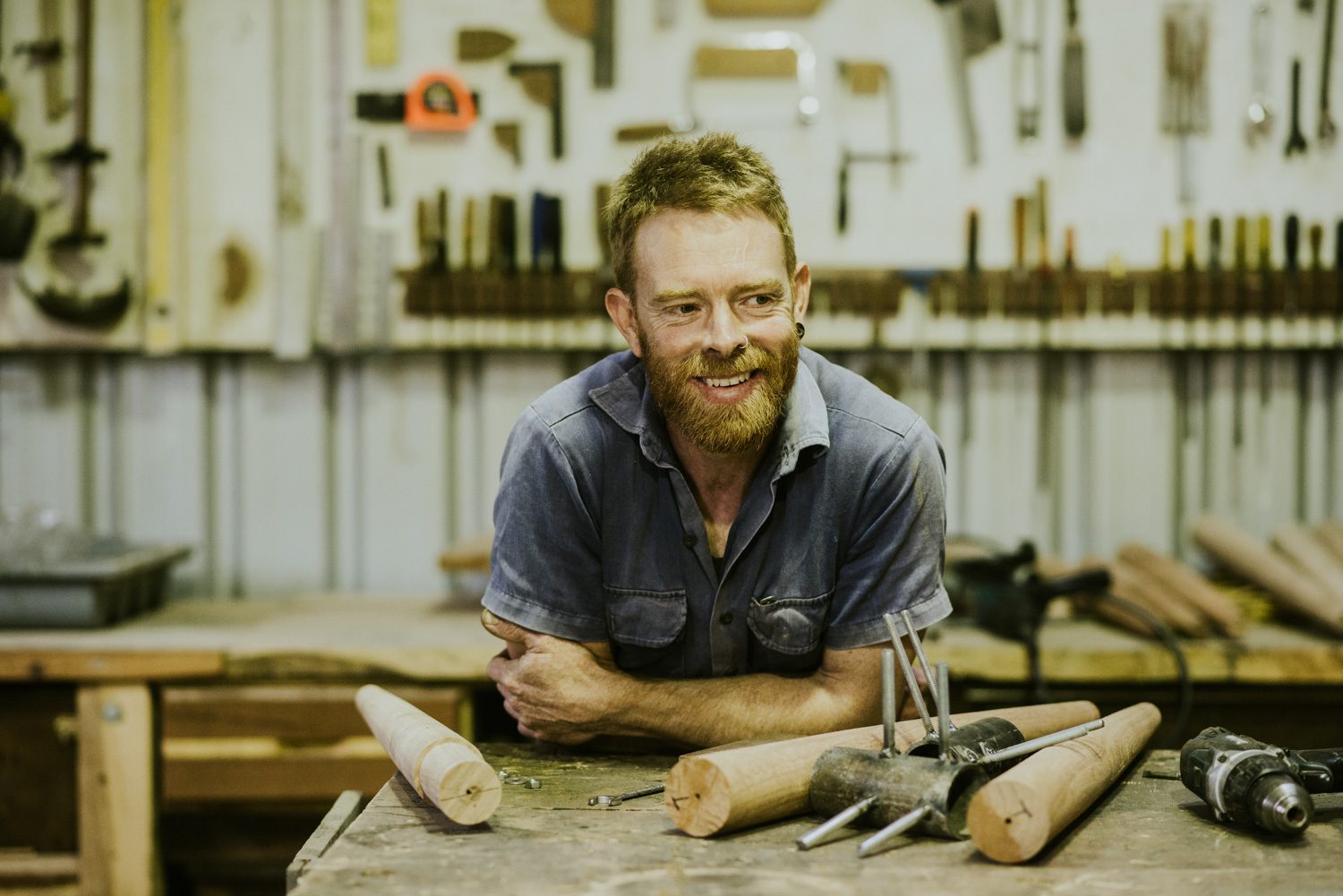 In terms of his work, Michael struggles to define exactly what it is that he does. When pressed however, he would call himself an artist craftsman, as he builds functional pieces of furniture with a unique aesthetic. “Some days I feel like an artist, some days I’m just making things, but there’s always a craftsman aspect to it,” he says. “Doing quality work is really the most important part of it though.”

No two pieces he creates are the same as they depend on the particular desire of his client. Some request work that is highly refined, while others prefer pieces with a raw finish. “Every job is different. Most of my work is based on commission and I do all sorts of things. Some are purely functional but others allow me more leeway with the design,” he explains. “I like to leave elements of where the piece has come from, so be it the shape of the tree, or chainsaw marks, or something that shows the processes that were involved in the making. I’m not really into rustic though, so I like to use those elements in a really considered way.” 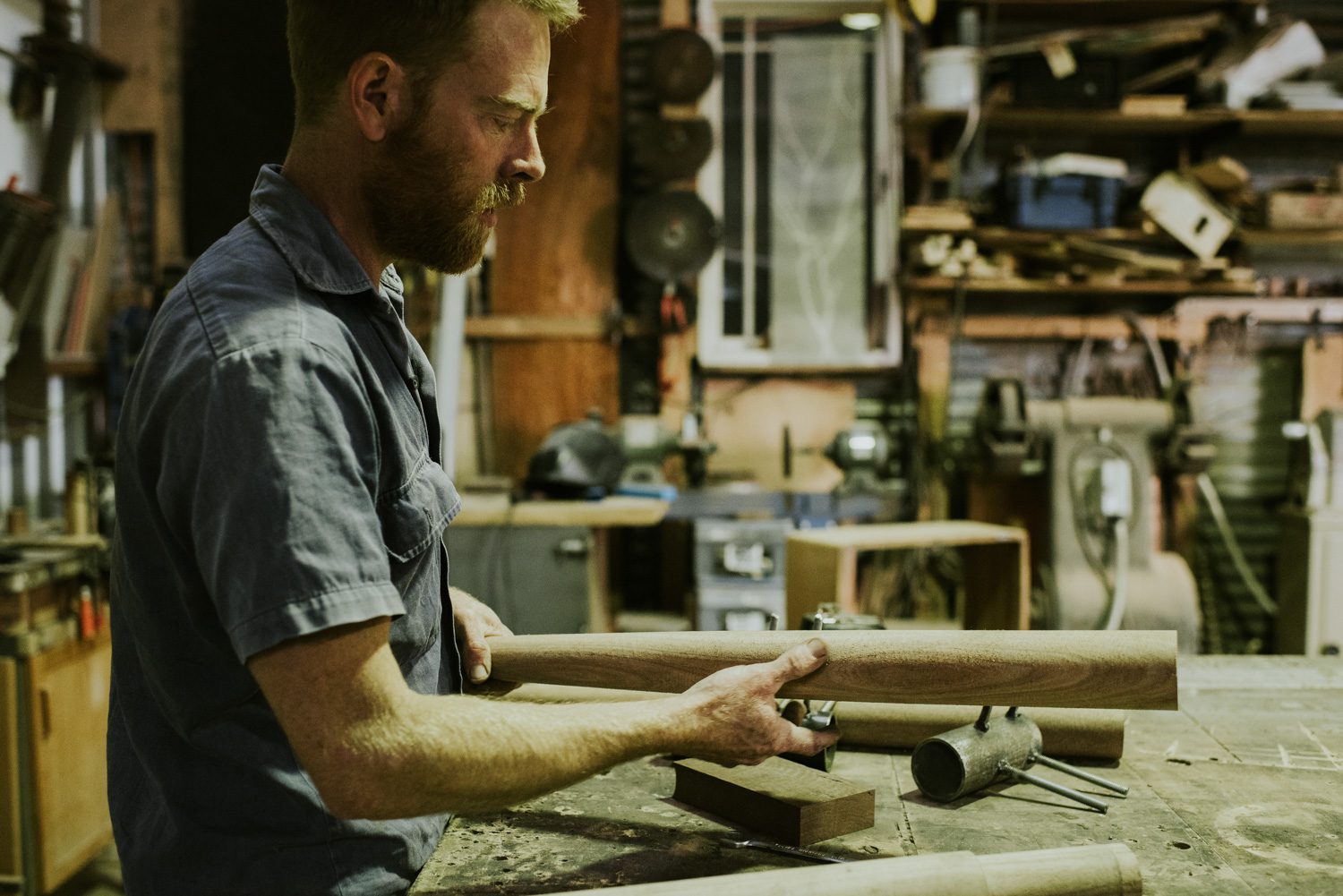 For Michael this considered approach gives him great pleasure. He acknowledges that finding solutions for the unique problems of each job is part of what he enjoys the most. This can sometimes require him to make bespoke tools or modify existing processes to complete the job. His current work, for instance, is on a commission for a modern dining table that features a custom-made joinery system designed to allow the table to be easily dismantled for moving or repairs. In addition to achieving this functionality, the table must also retain both the beauty and structural integrity essential for each piece that heads out the door. This attention to detail and commitment to elegant problem solving sometimes keeps Michael awake at night turning the problem over in his mind until the solution is found and he heads back to the studio to try something new. 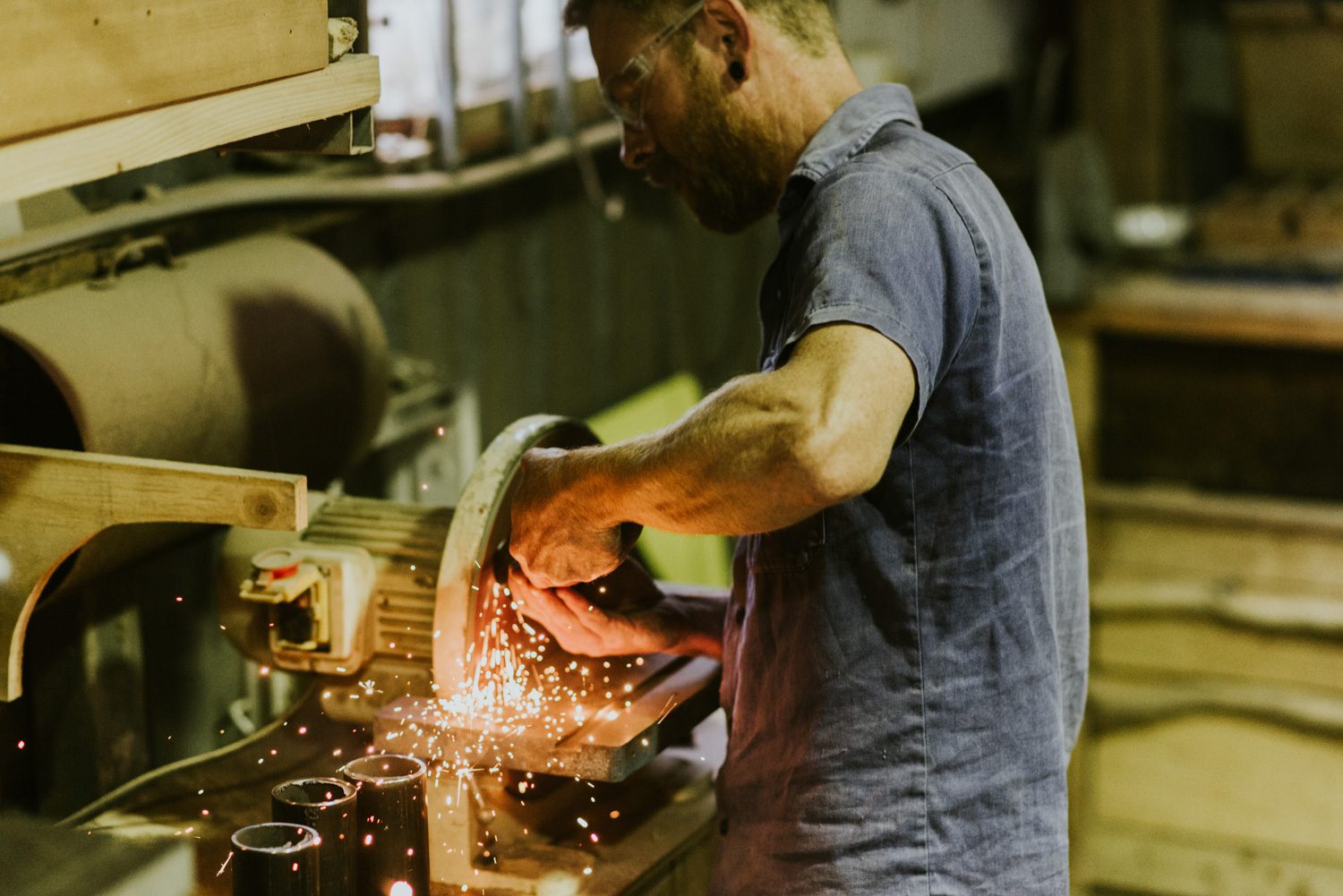 The closeness to nature that the mountains provide has influenced Michael’s work in numerous ways. Whether through collecting found materials, or simply through the inspiration gained when hiking or camping in the wilderness, the natural world offers him unlimited stimulus. Now, his eldest daughter is developing an interest in what he does, and showing promise as a budding apprentice. Whatever the future holds, it seems certain that Michael will continue to thoughtfully and unpretentiously produce some of the best handmade furniture that you can find not only in the mountains, but also around the country. 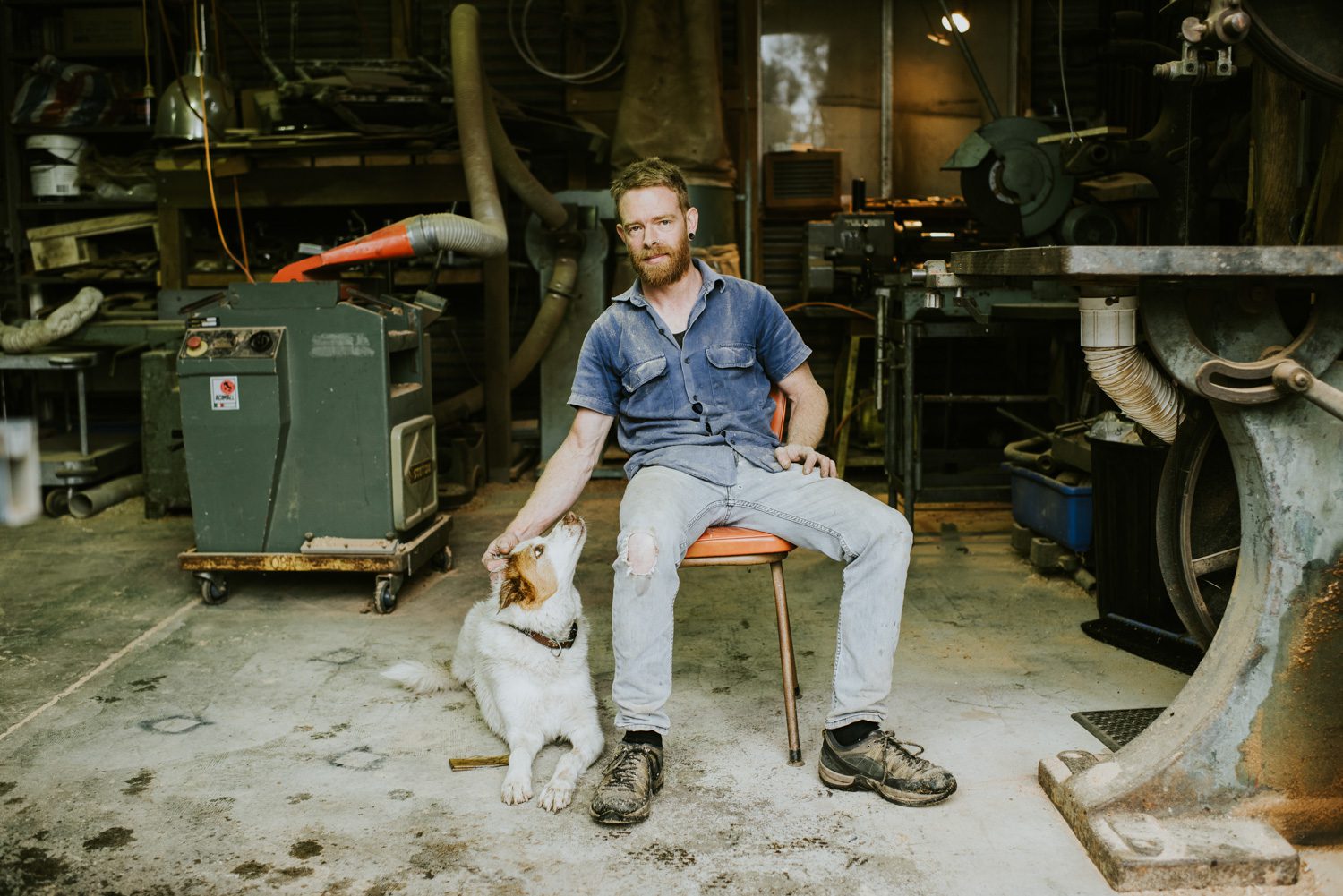