Kayo Yokoyama’s approach to her work isn’t overly precious which, considering she’s one of Australia’s most highly regarded artists and she’s working with glass, might come as a surprise. It certainly did for the organisers of the Blake Prize for Religious Art (for which Kayo was a finalist in 2018) when she knocked back a protective cover for her work. “I want people to be able to get closer, to be able to really look at my work, and if they want to touch it, let them!” says Kayo. 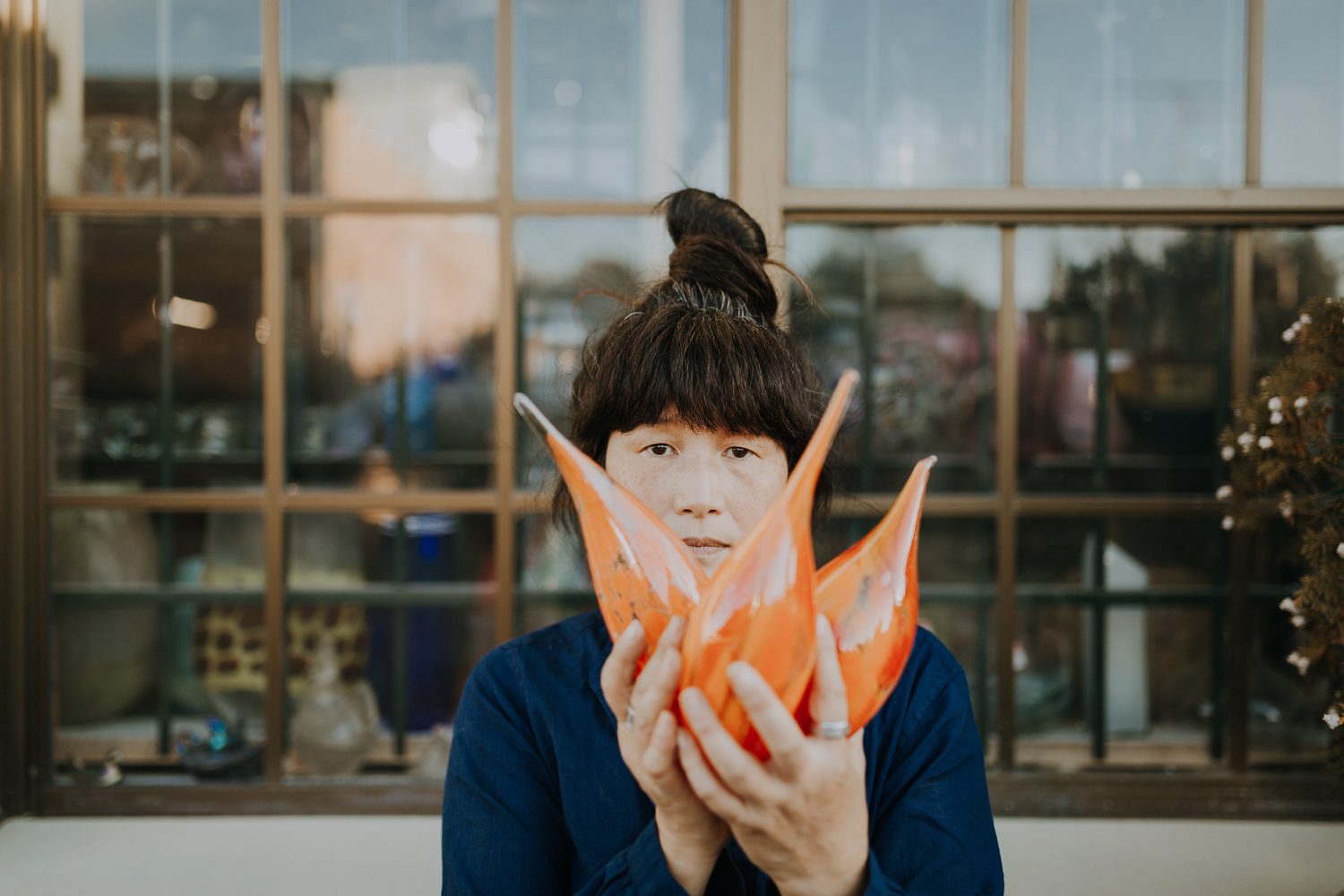 Kayo’s selection as a finalist reflects not only her prowess but also illustrates the evolution of the Religious Art prize. No longer defined by a narrow, western understanding of religion, the prestigious award seeks to encourage discussion about the nature of spirituality, hope and belief in contemporary times. Perhaps more significantly, non-belief or even not knowing what one believes are treated as equally valid perspectives. 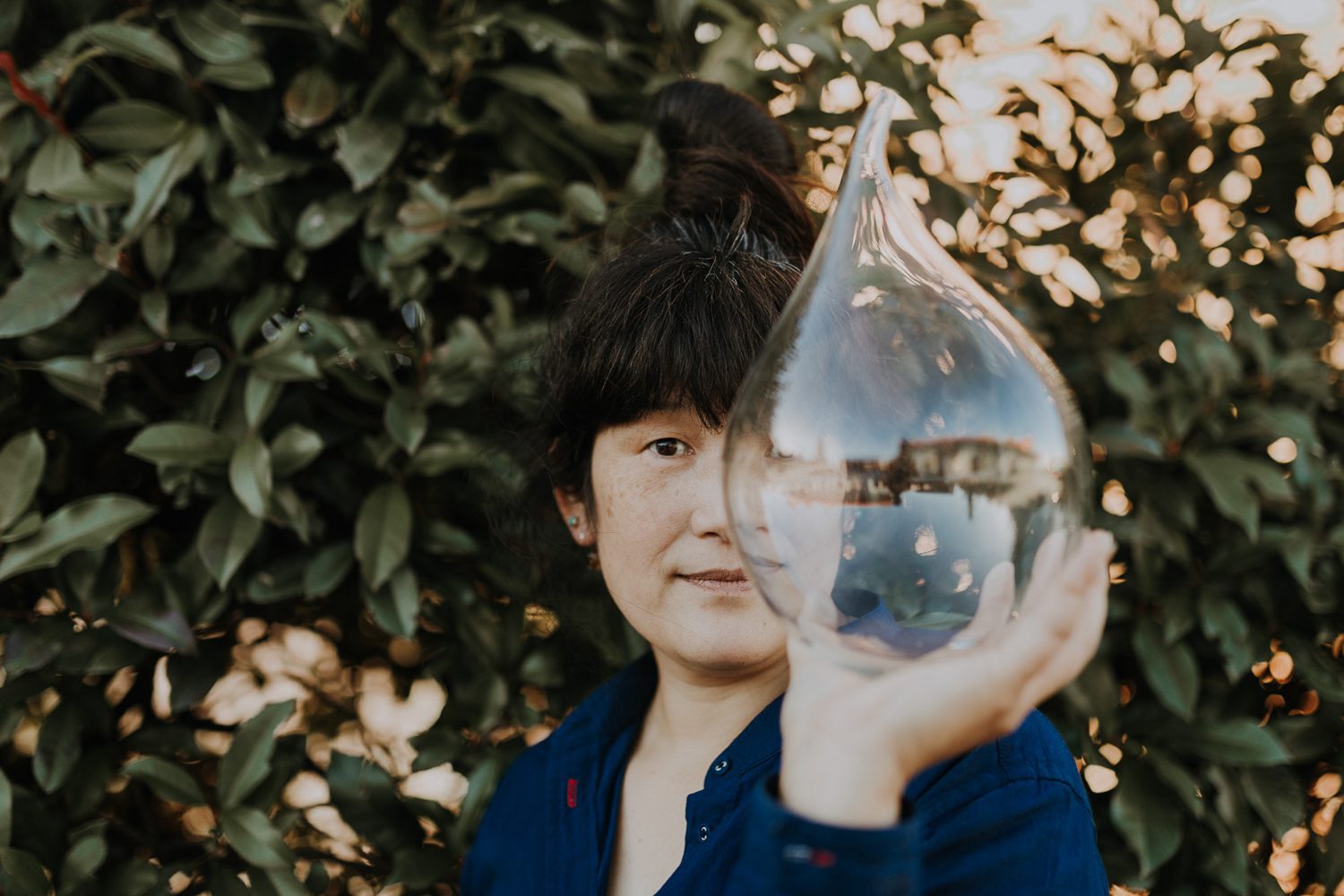 By her own admission, Kayo’s entry Conversation falls in the latter camp. “I never thought they’d accept my work as my piece was more like a question for myself,” she explains. Comprising a pair of elongated glass domes, the piece is etched with her signature trees to create a miniature landscape. A moon is carved into the taller dome, referencing the spiritual tradition of Shinto and the mythology of her birthplace, Japan. 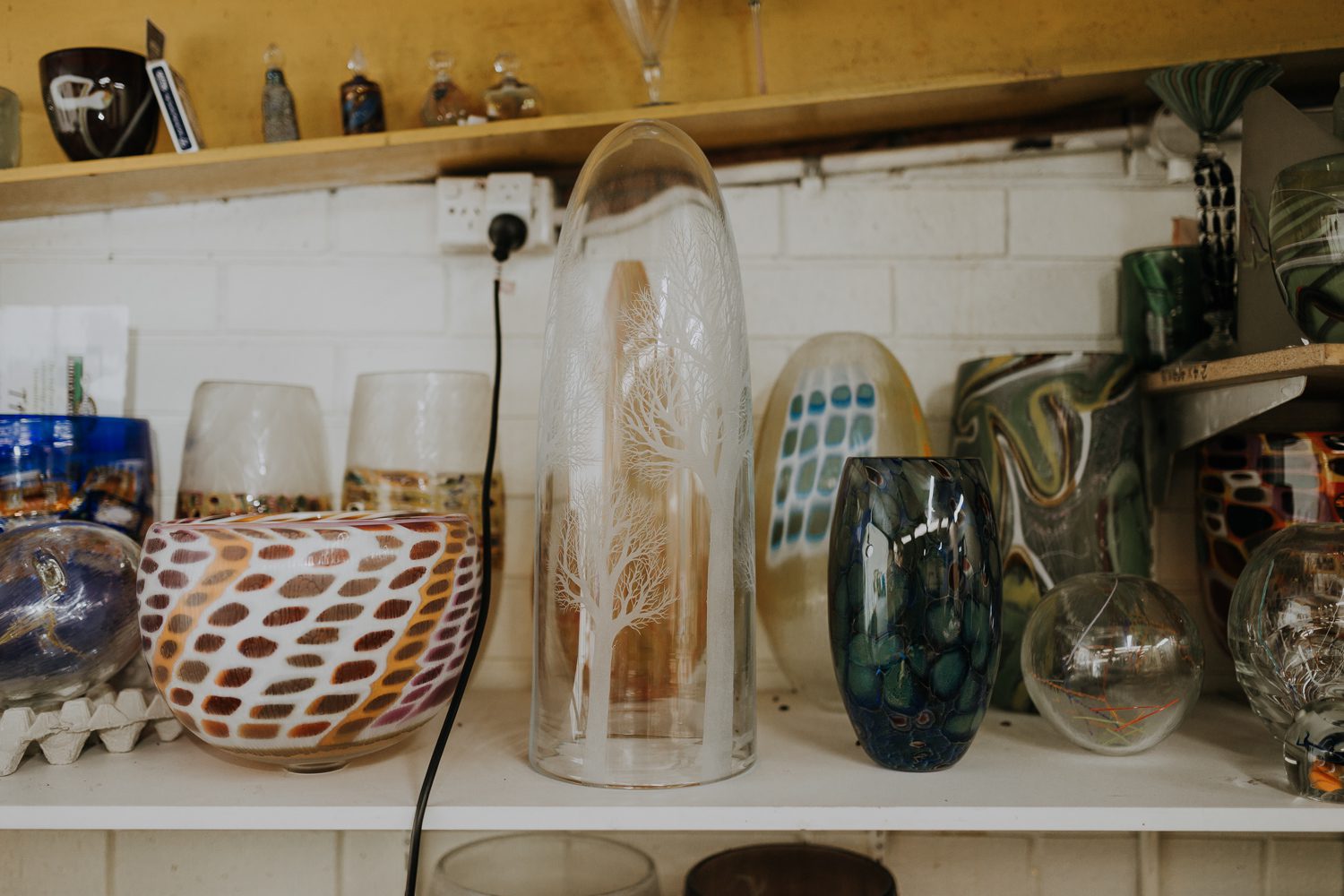 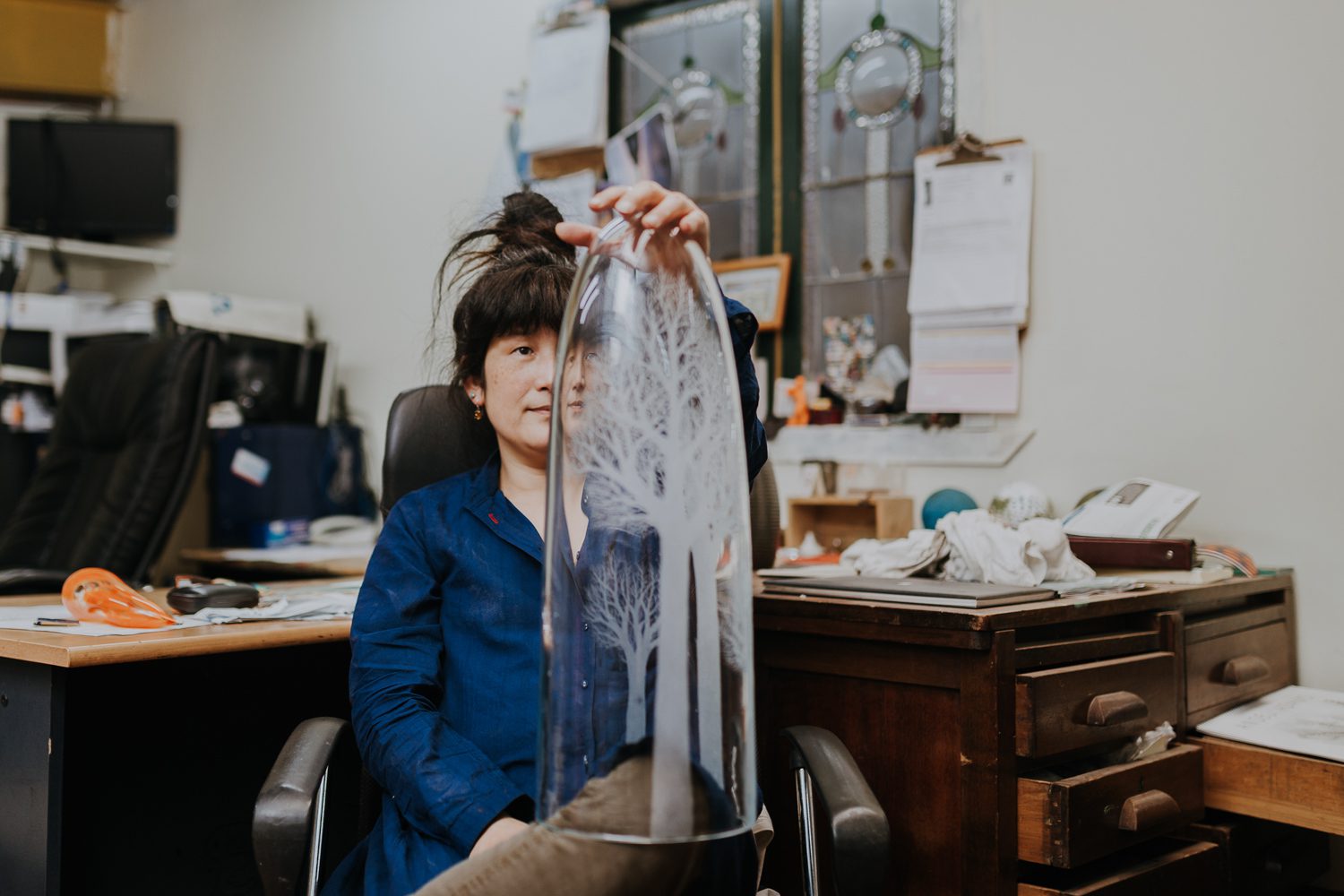 Shinto is a belief system that predates the arrival of Buddhism and Christianity in Japan. It reveres the natural world, including one’s ancestors, and is anchored by the belief that both animate and inanimate elements of the natural world possess spirits, or kami. Practitioners seek to smooth the way of the kami in the physical world by devoting themselves to ritual practises and prayer, living harmoniously with others and serving their communities.

Growing up in Sanda, a city outside Osaka, Kayo admits that for much of her life, she thought these beliefs were “mumbo jumbo,” revealing that it’s only relatively recently that she has explored more her heritage more deeply. “Acknowledging myself as being Japanese has been a big thing,” Kayo reveals.

Like many children in Japan, Kayo grew up yearning to be an ‘American girl’. She studied English intensely, was obsessed with western fashion and the cult 80’s movie Flashdance… she even attended the local Catholic Church.“I just wanted to know what it meant to be a Catholic because every time I’d watch an American movie, they’d always say, ‘oh my God!’, ‘Thank God!’ and ‘God bless you!’” she explains. “My parents thought I was a nut!”

Nut or not, it was a fascination that led Kayo to the USA for the first time as a 16-year-old exchange student. Over the next few years, Kayo spent time studying in both Kyoto and the USA, but when her enthusiasm for her studies subsided and when her student visa expired, she returned to Japan in 1995.

What happened next was to be a pivotal moment in Kayo’s life.

“I came back to my home-town, Sanda,” says Kayo. “There’s a huge landfill there and any glass they find is recycled at the local cultural centre’s glass studio. I signed up for glass blowing classes on the weekend there, just for fun, and I loved it.”

After taking glass blowing classes for over a year, Kayo realised she wanted to take her new passion the next level.

Guided by her adventurous soul, Kayo moved to Australia and enrolled in the Bachelor of Visual Arts at Sydney University in 1997. She arrived ready to become a professional glass blower but found the reality wasn’t quite what she’d imagined. “I really loved the glass but over time, I developed a totally new approach and glass became a canvas to me,” she explains. 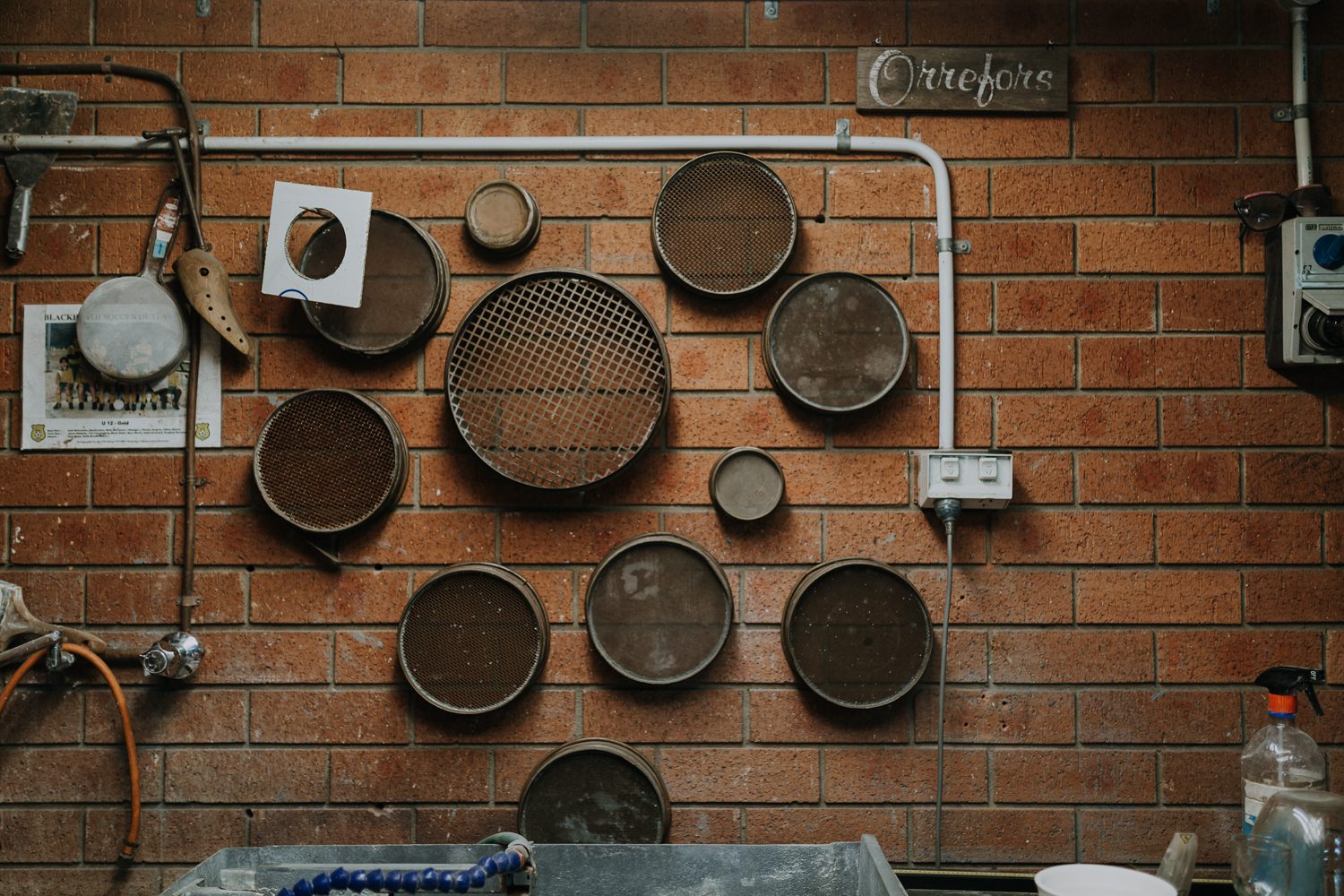 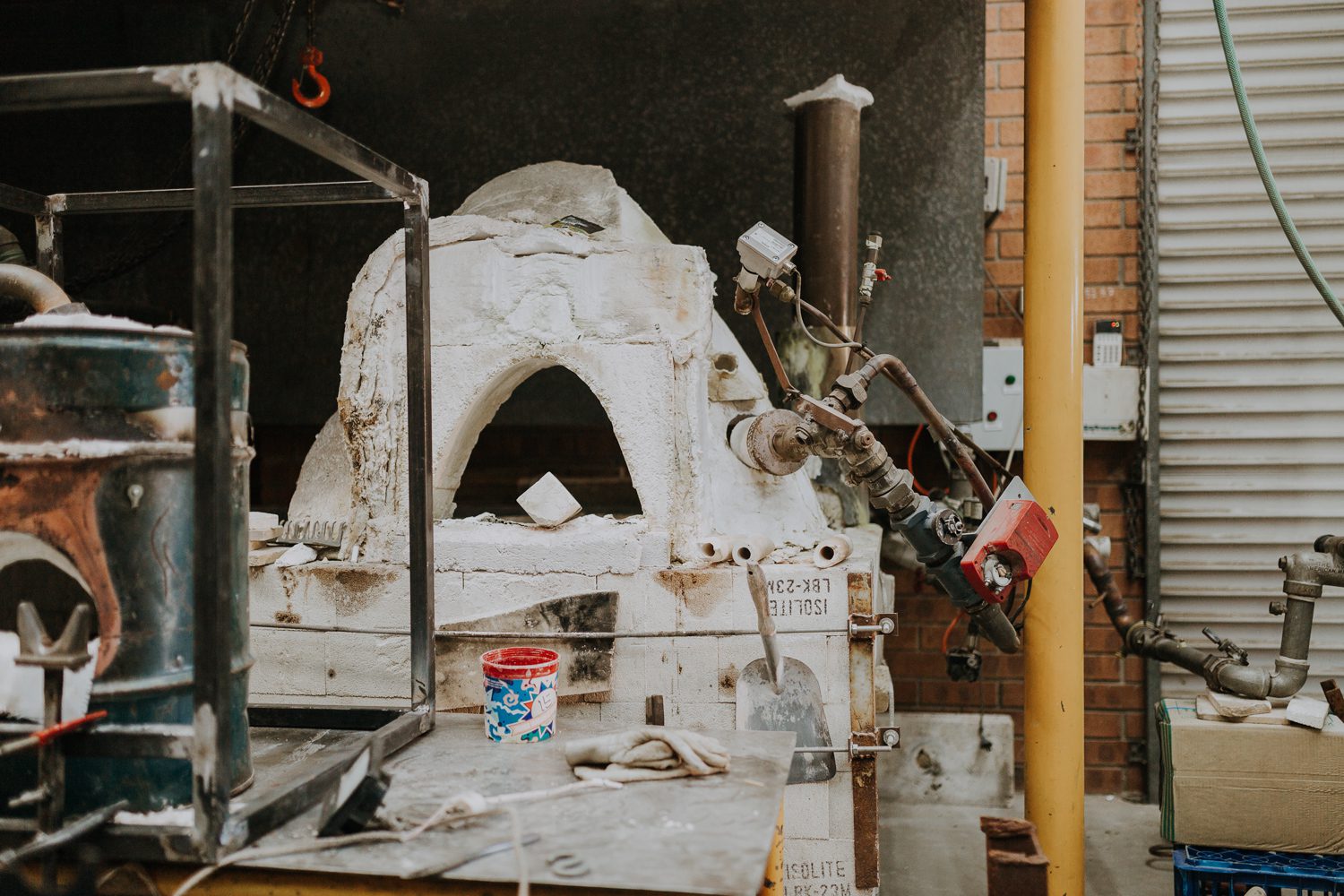 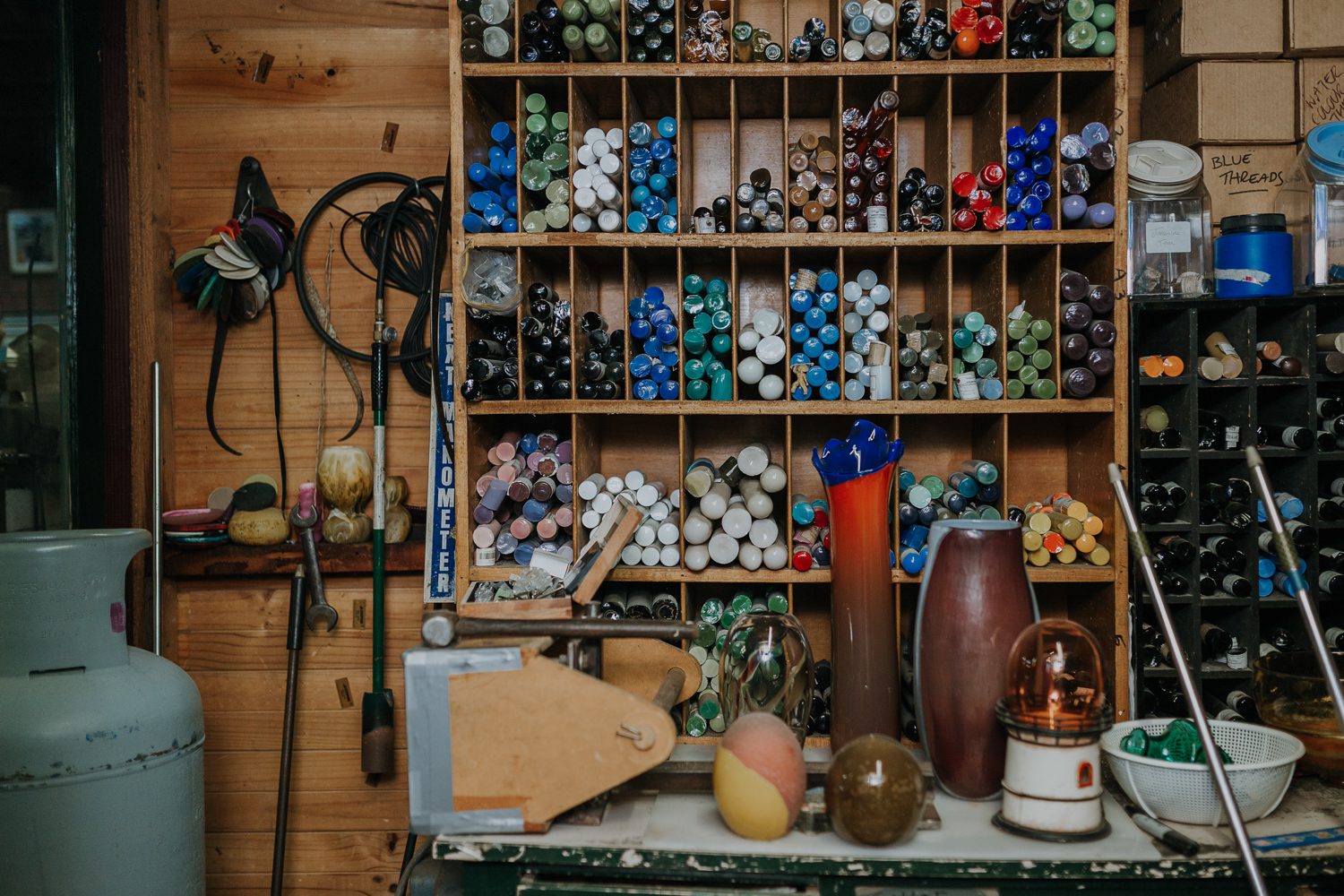 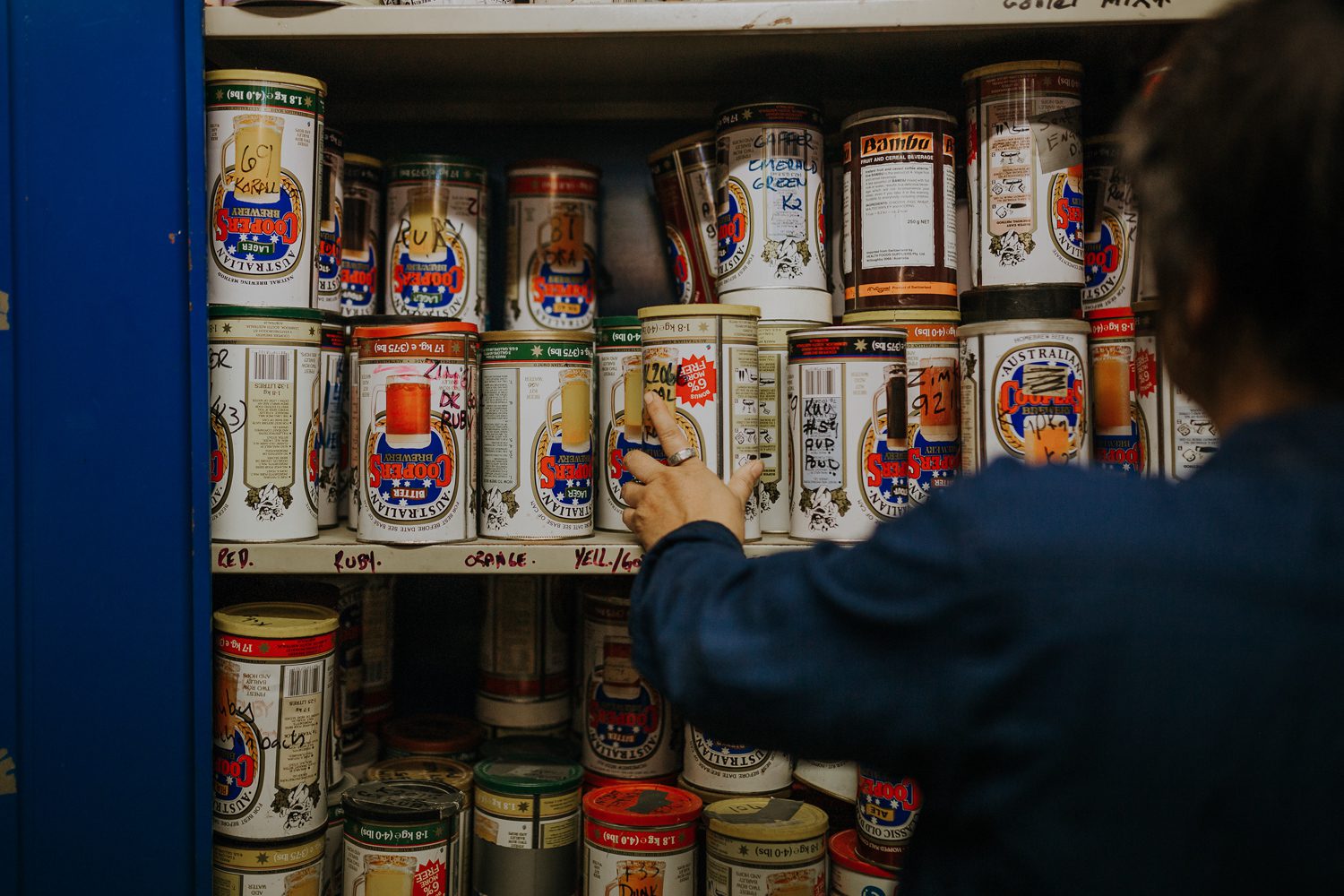 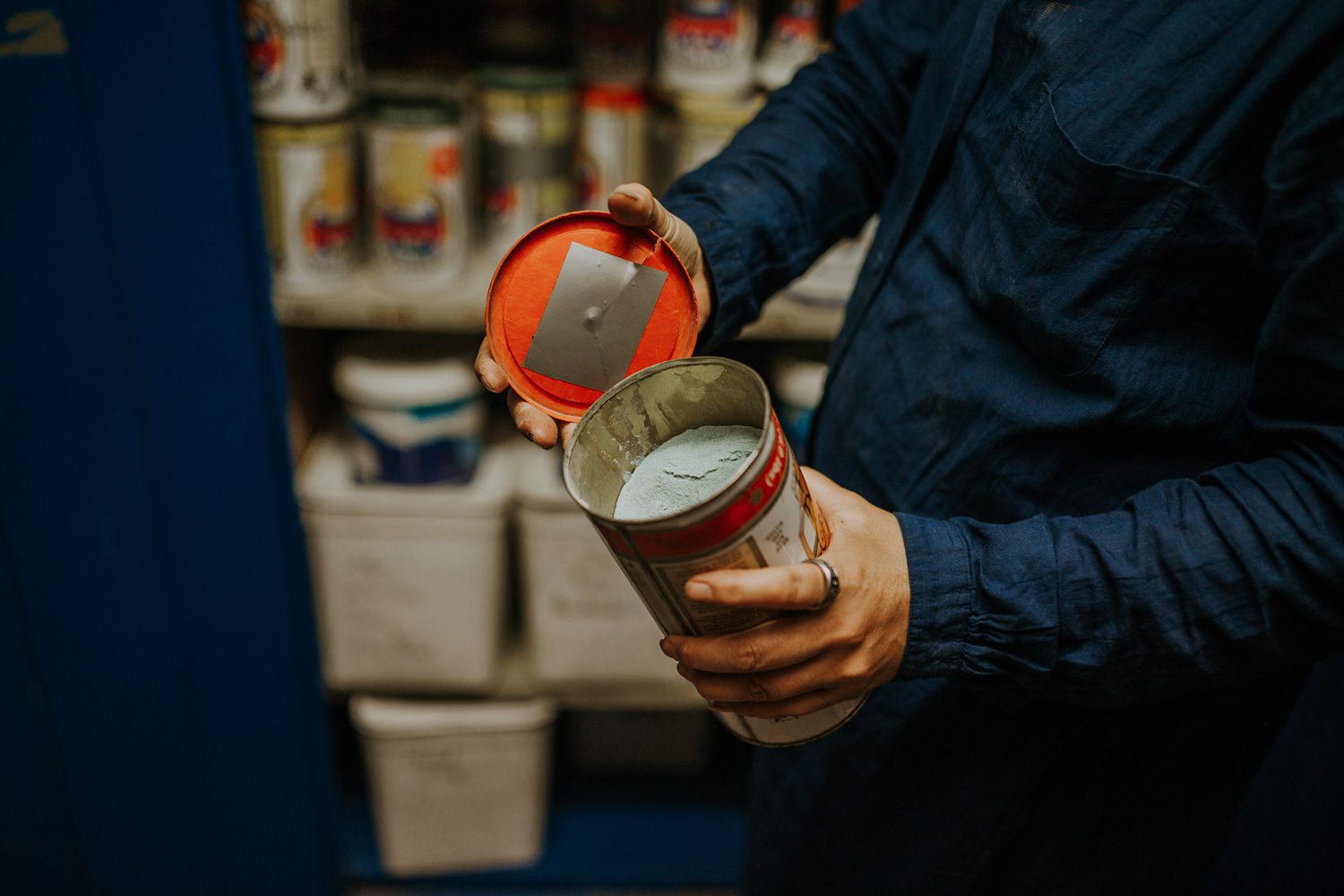 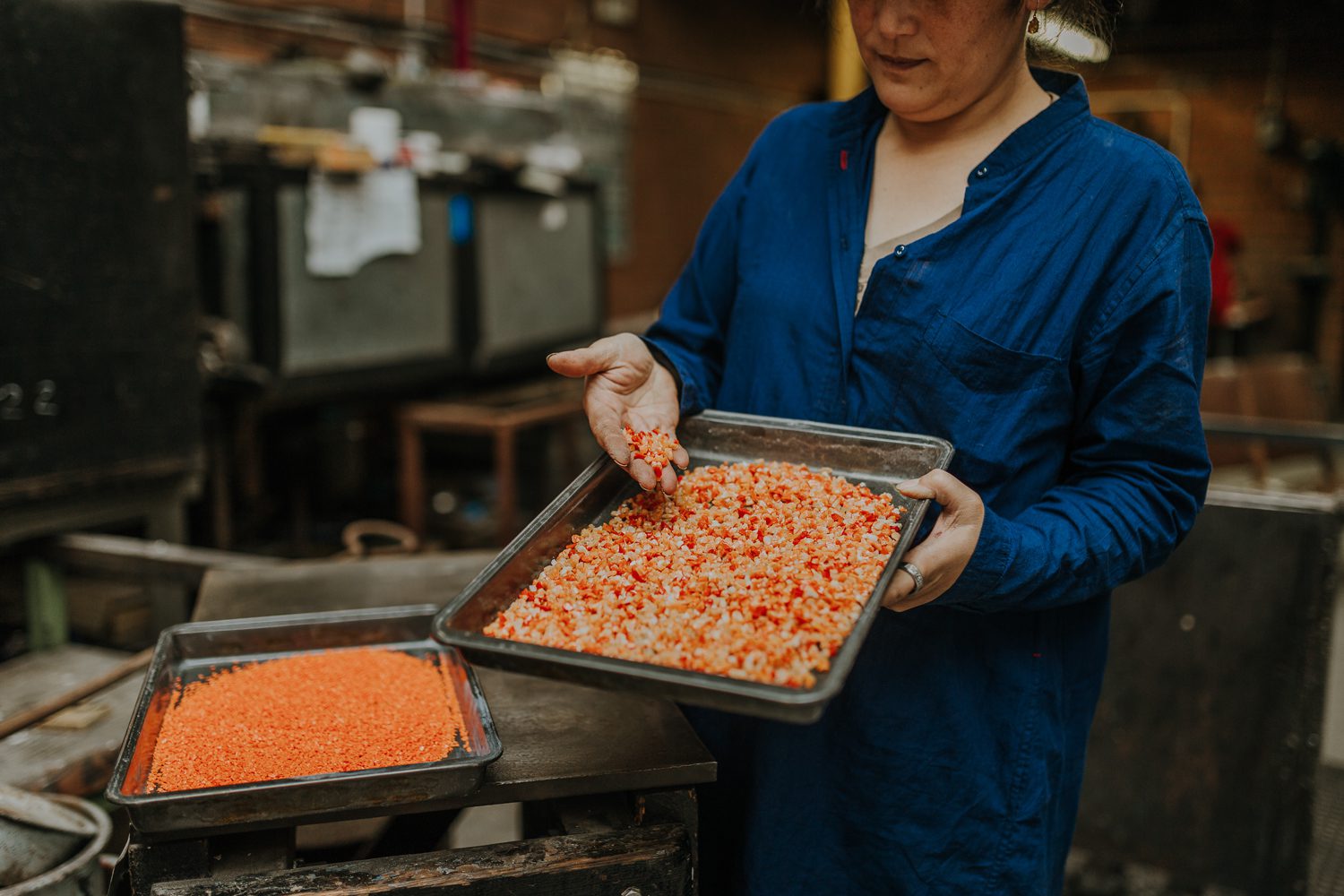 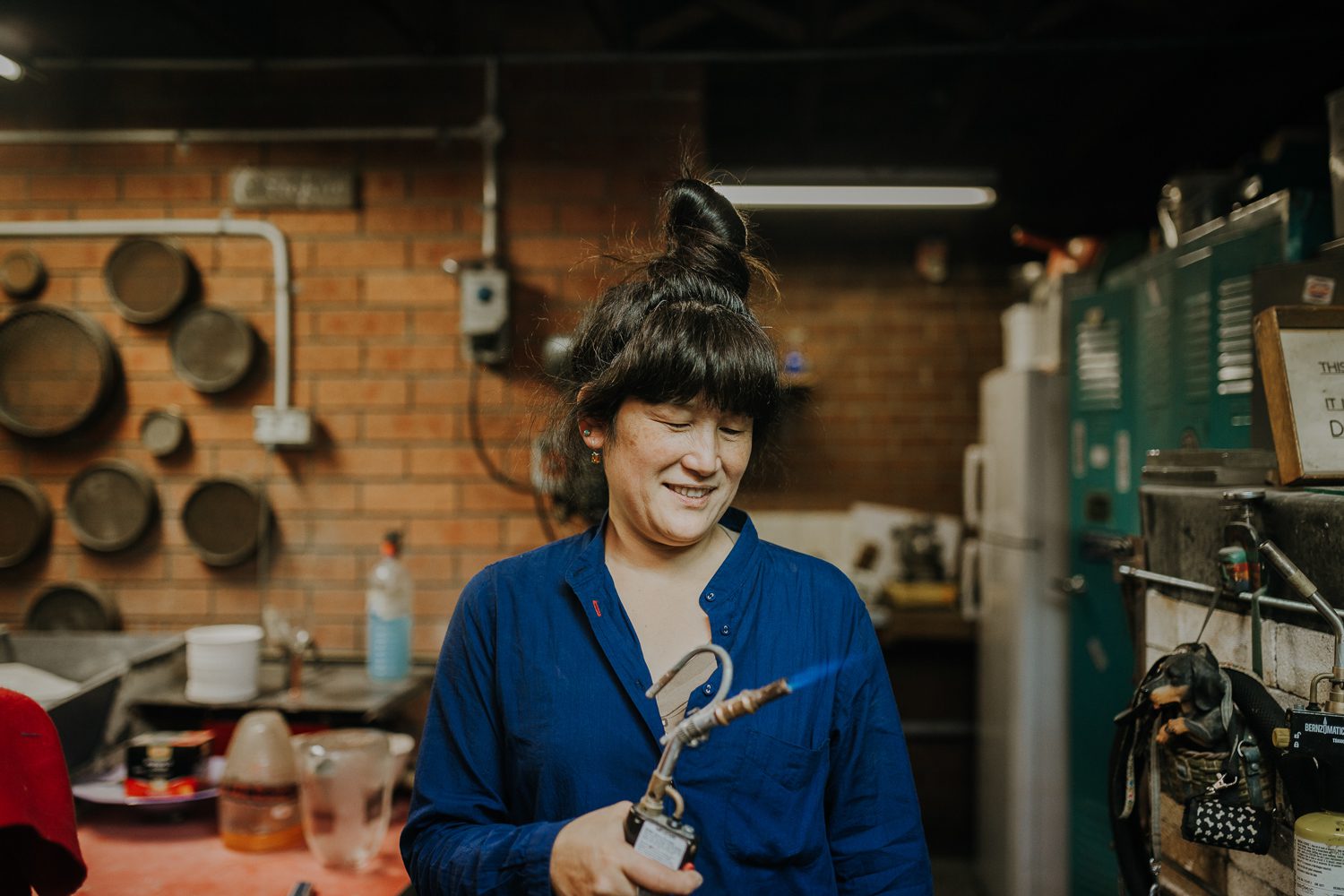 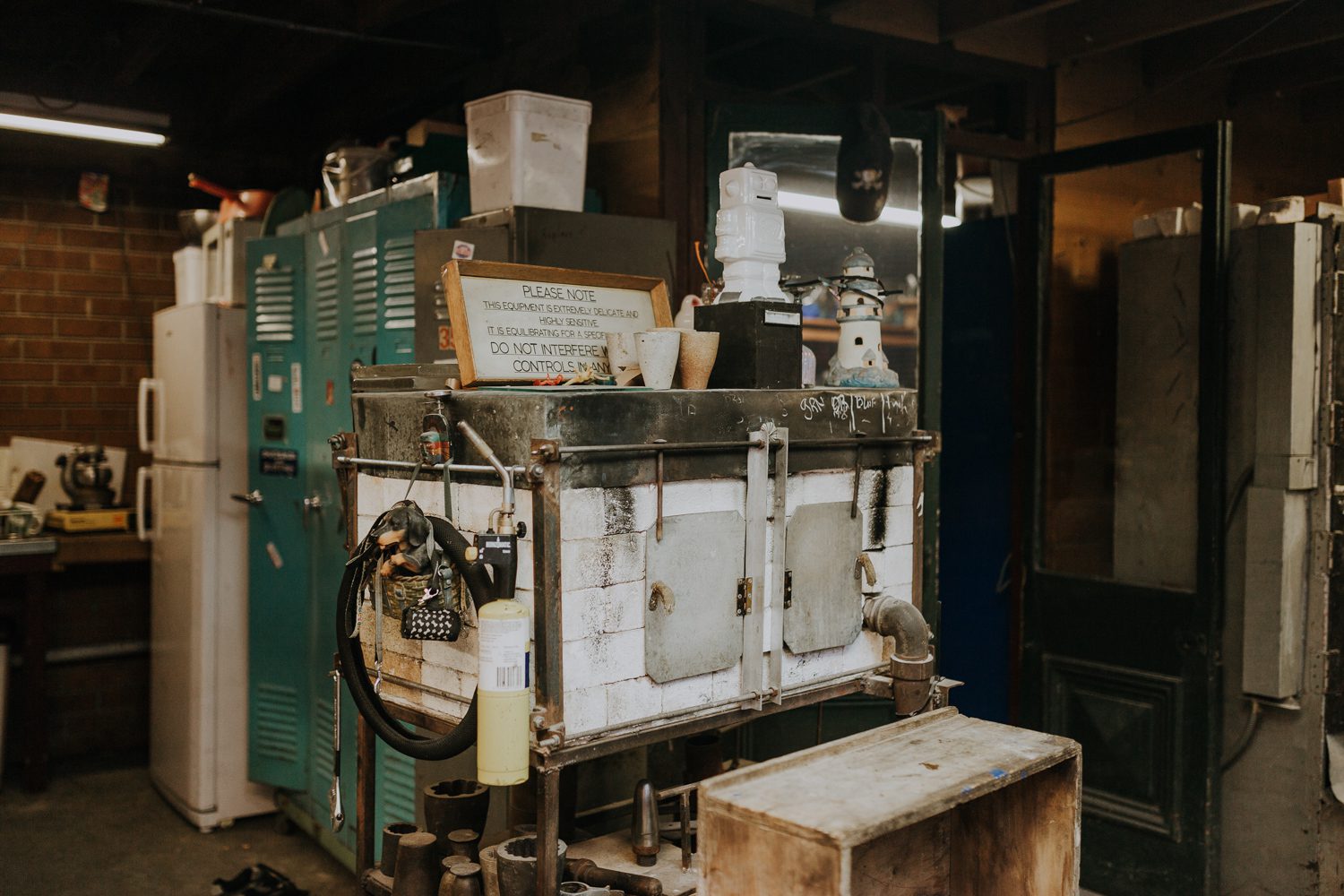 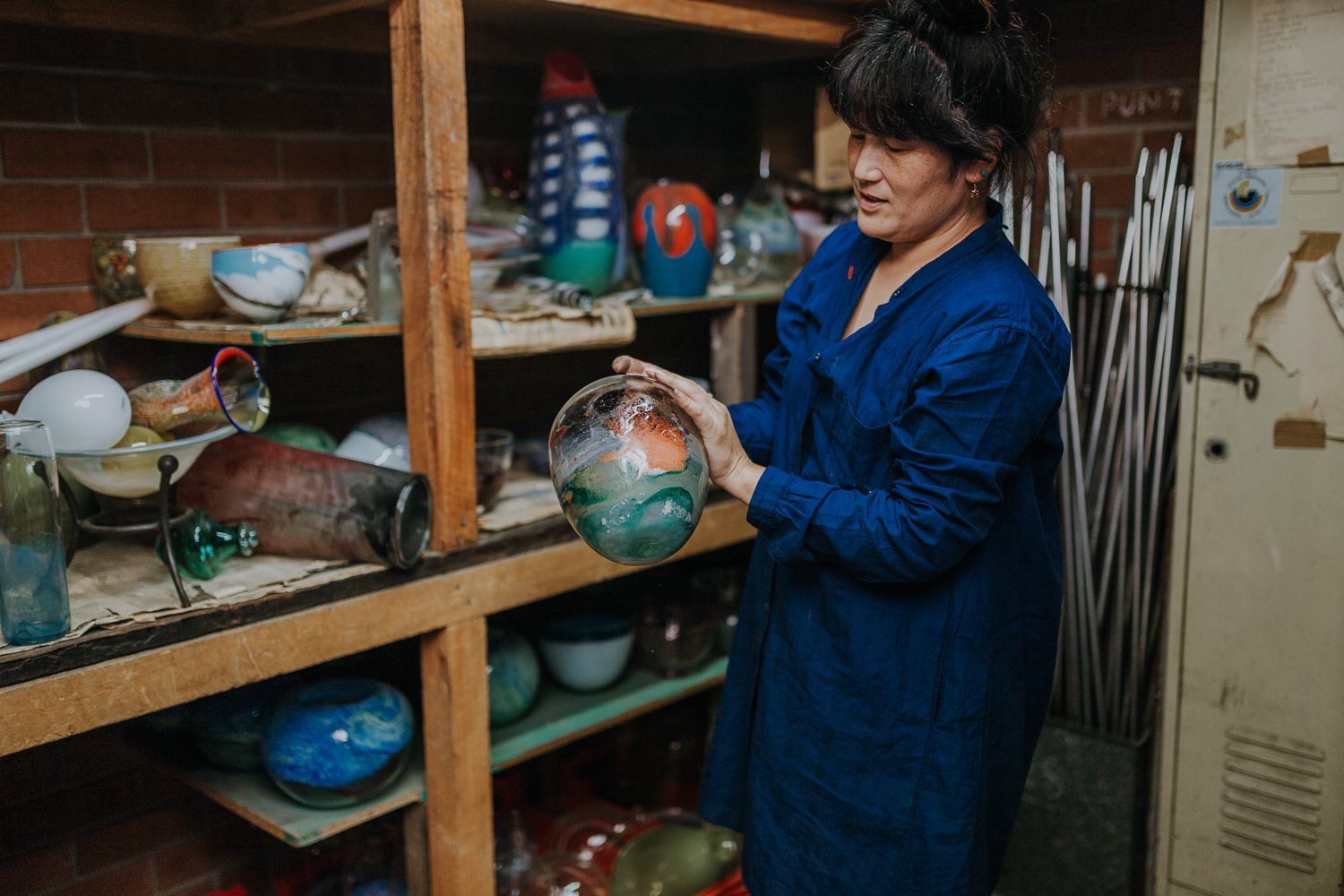 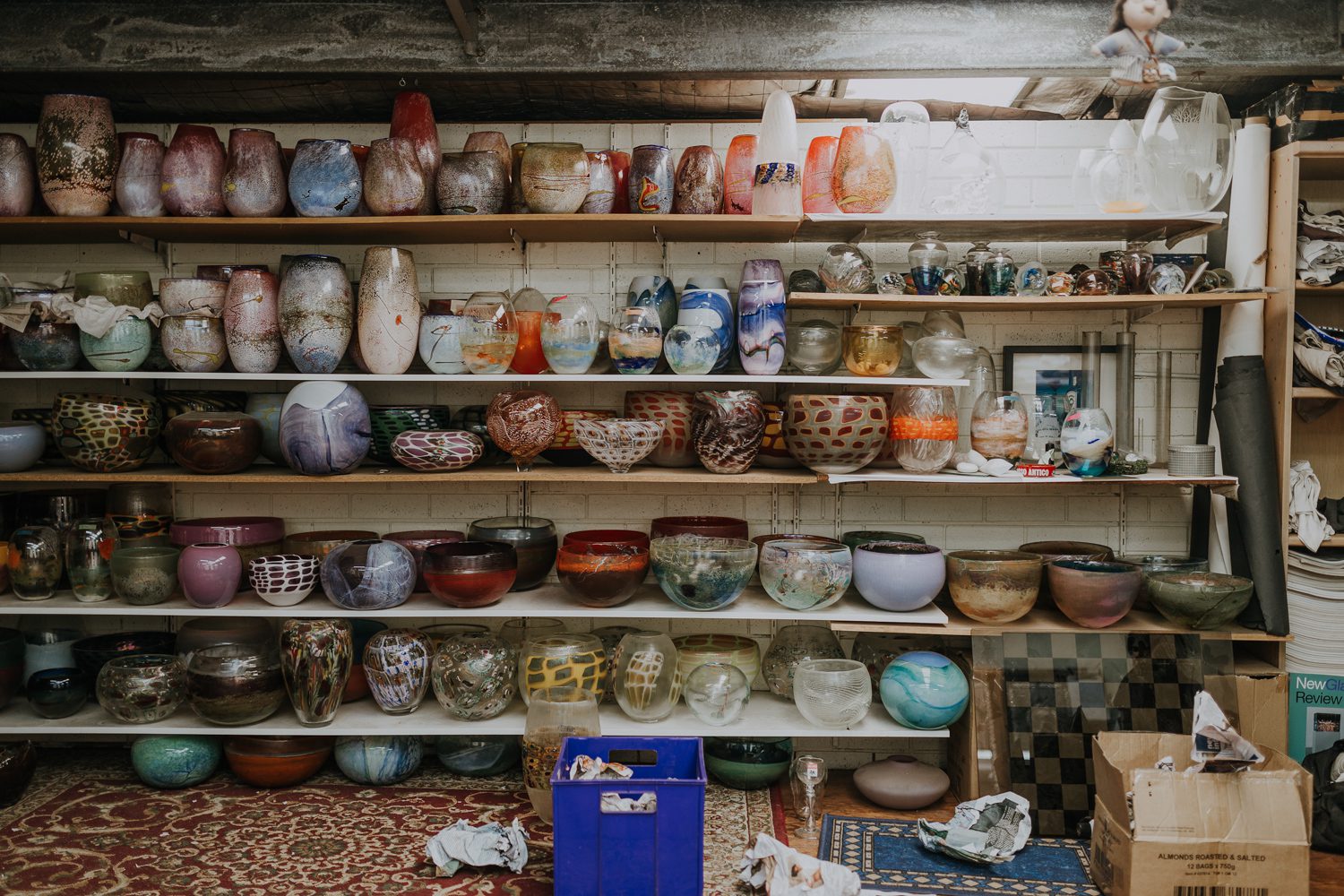 Sometime during her studies, Kayo fell in love with fellow artist Keith Rowe who was based in the Blue Mountains. When she graduated in 2001, Kayo made the move up the hill. Two children followed in quick succession, prompting her to put aside her work for eight years. “I couldn’t do both,” she recalls. “I couldn’t find the balance so I went cold turkey, no art, nothing. I didn’t even go to exhibitions!”

It was an approach that not only allowed Kayo to be the type of parent she felt her children deserved, but it also created the space for her to learn to enjoy the outdoors. “I was such a city girl,” she laughs. “I never thought I’d have a backyard or chickens or a veggie patch.”

Under the towering gums of Blackheath, Kayo started to see the nature that surrounded her, especially the trees, as integral to her understanding of self and what it means to make a home away from home. “I sit in my chair, with a cup of tea, surrounded by trees and I’m home,” says Kayo. “When I go to Japan, I’m surrounded by buildings and I don’t feel at home there.”

Once her children were both at school, the lure of glass proved too strong and Kayo returned again to Sydney University’s School of Fine Arts to commence a Masters degree. There, she continued to perfect her engraving skills, using diamond tipped dentistry drills to create her labour intensive pieces.

Today, her expertise means that whilst she loosely plans what she’ll inscribe on her glass canvases, she doesn’t sketch or rehearse her strokes. She simply picks up her drill, pops on some music (“anything I can sing along to”) and gets to work. Animals, she says, are easy to engrave. Human faces are more of a challenge, though “once you get the eyes right, the piece will be totally fine.” 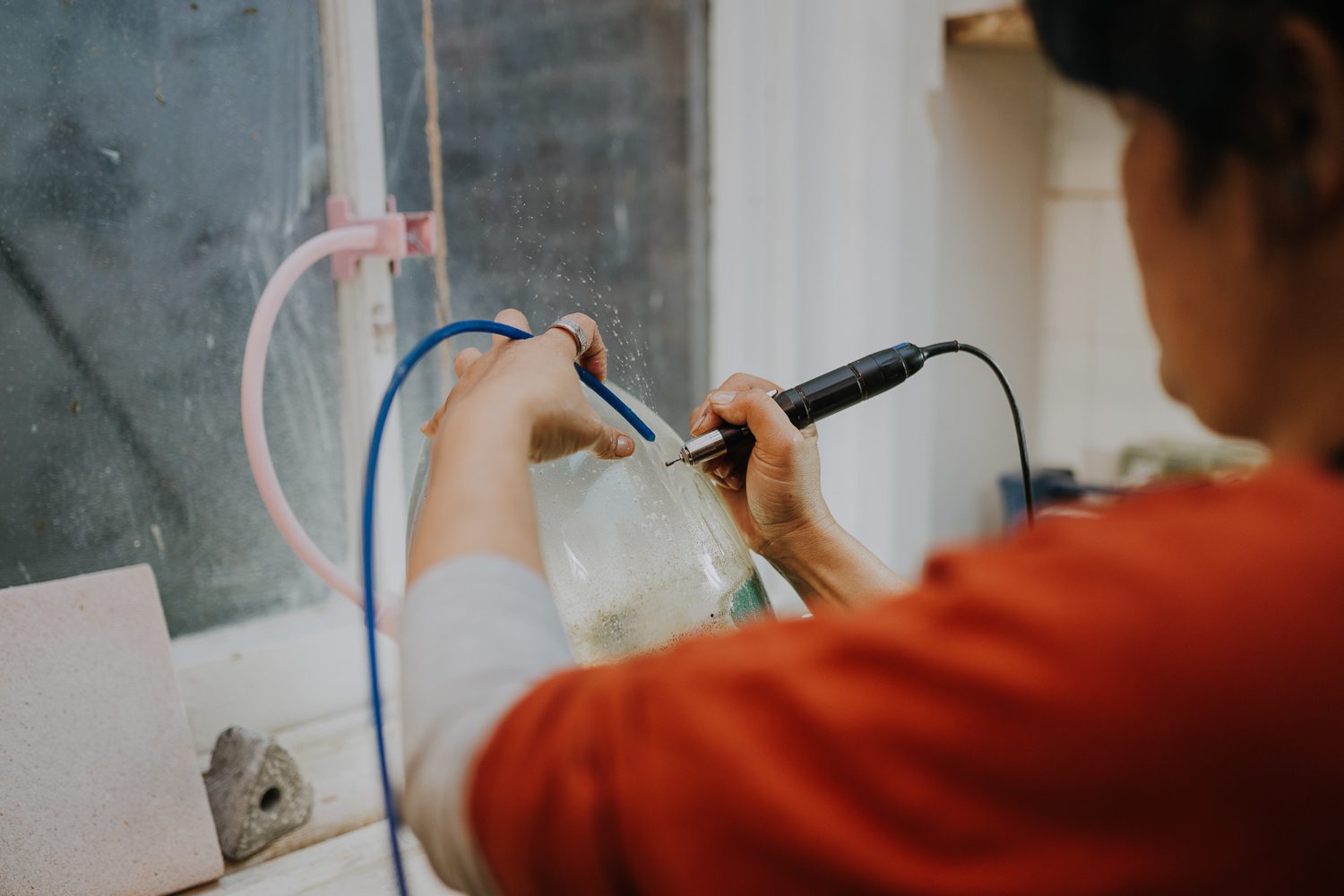 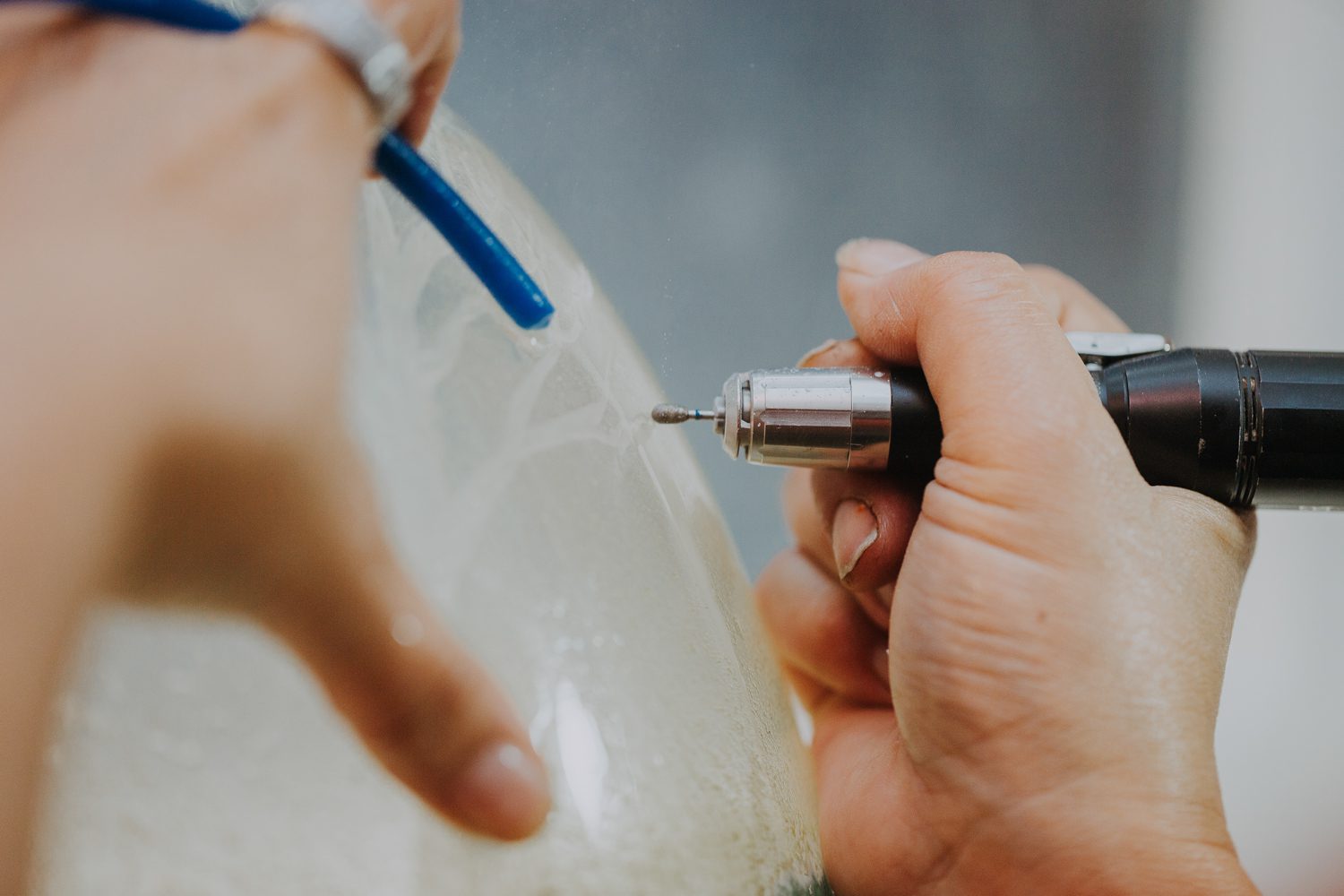 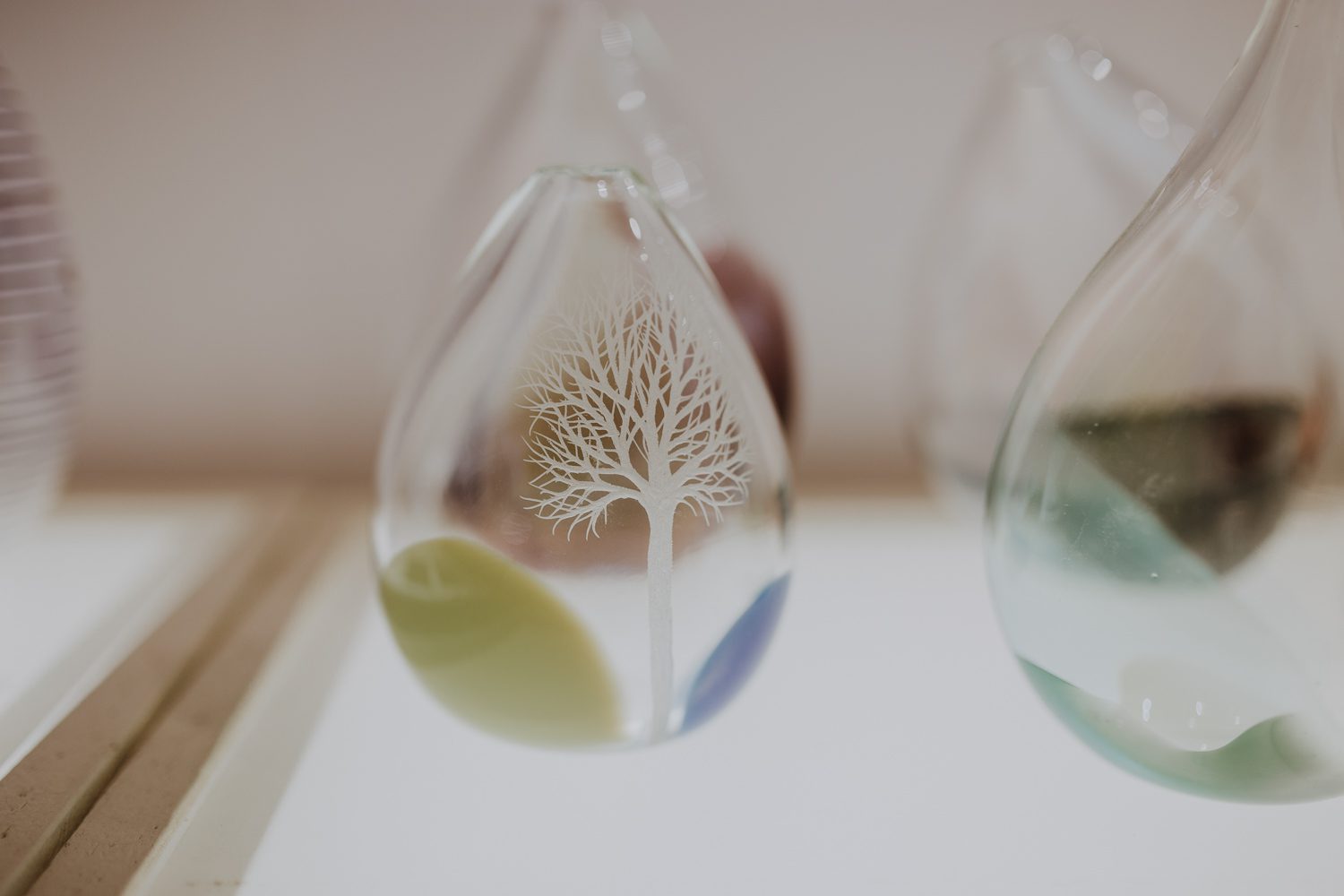 Kayo’s work concerns two distinct themes. Visitors to the Blue Mountains Cultural Centre or Scenic World’s annual sculpture exhibition will be familiar with the first: her balloons and bubbles, which epitomise whimsy and delight. They’re designed to prompt a smile and reflect upon the sense of wonder that comes with being a child. Her motivation in making these pieces is refreshing. “I like fun,” she states with another of her infectious giggles.

The second theme has its roots in Kayo’s own youthful departure from Japan. The need to explore one’s own identity, separate from the place we have always known and those who have always known us is not unique. But Kayo’s journey toward her own understanding of self and appreciation of her cultural identity plays out in the form of artistic exploration and confronts universal themes: what it means to belong, how your sense of self is forged and feels secure in your surroundings.

Funnily enough, it was the installation of beehives in her Blackheath backyard that inspired Kayo to explore the beliefs that had underpinned her upbringing, the cultural identity she’d worked so hard as a young woman to ignore. “I couldn’t work out why I was so fascinated by my hives until I realised there’s a kind of Zen in beekeeping,” she says. “You observe your bees but you let them do what they need to do.”

Though Kayo’s one of only a handful of artists in Australia capable of both blowing glass and engraving it, with considerable acclaim, accolades and awards, the self-effacing artist, with her big laugh doesn’t regard herself as an artist of any note, simply a work in progress. “I’m still exploring,” she says. “No one ever loves themselves 100 per cent. We’re never satisfied with who we are and where we’ve come from. We’re always seeking answers that can’t be answered. That’s just us, isn’t it?” 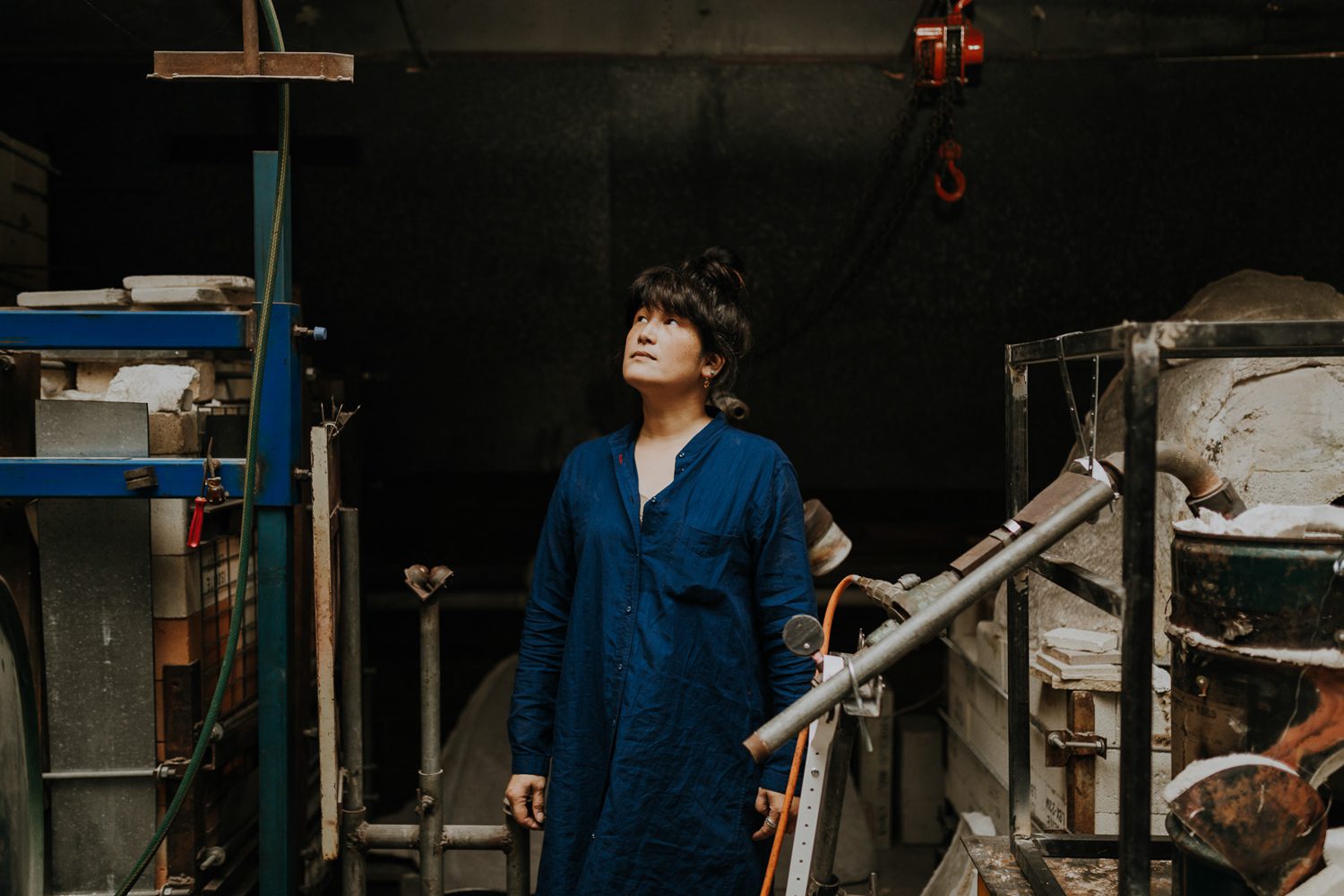