Almost the first time I met photographer Harold David, it was to buy his house in Blackheath. We met up on a chilly winter’s evening at Sydney pub, the Norfolk Hotel on Cleveland Street. Harold strode in wearing a trucker’s cap and a handsome vintage plaid hunter’s jacket. He wore them well, with a quiet confidence like he’d stepped out of Twin Peaks. Who is this mysterious guy with the soft Mid-Western drawl? As we sealed the deal (Mountains style with a handshake over a schooner and chips), I figured that would probably be the last time I saw Harold. Just as I was moving up the hill, he was moving back down to Sydney, having found out he was going to be a dad to twins. But Harold hadn’t counted on how much he loved the mountains. 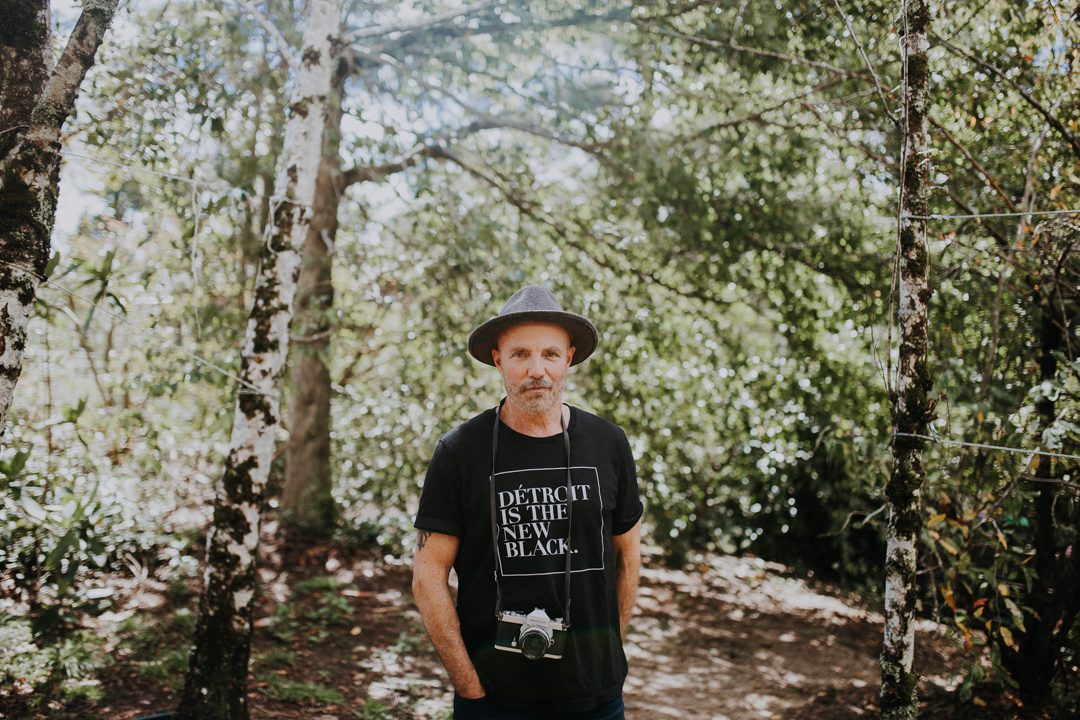 Born and raised in the Rust Belt of the USA, Harold emigrated to Australia in the mid-nineties. He’d studied acting at the Lee Strasberg school in New York, and he’d picked up some modelling work in Sydney. It was during a photo shoot that he realised what he really wanted was to be behind the camera, so he enrolled at the Australian Centre for Photography. To hone his skills, experimenting with different filters and lighting, he began taking weekend train trips to shoot at new locations not too far from Sydney. Katoomba became his favourite regular stop.

Hard work and natural flair saw Harold become one of Australia’s premier fashion and portraiture photographers, but he itched to make something of his own. “Fashion photography kind of papers over the cracks to create a kind of perfection,” he says. “In my personal work, I’m looking to reveal the cracks, to tell the stories of regular people.” 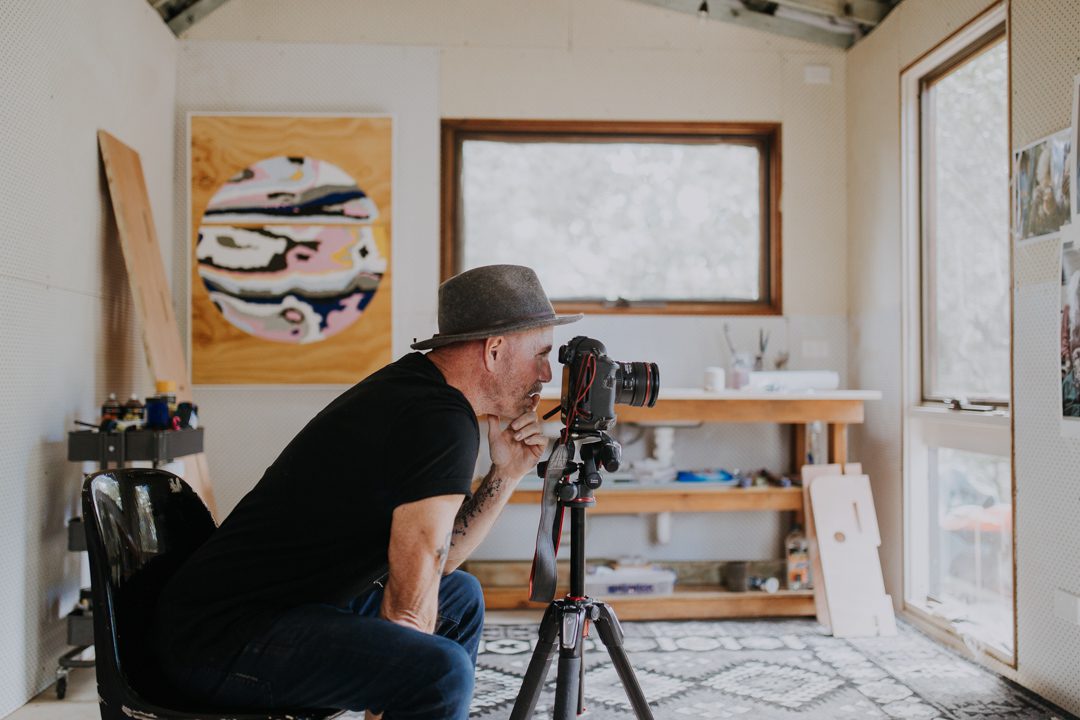 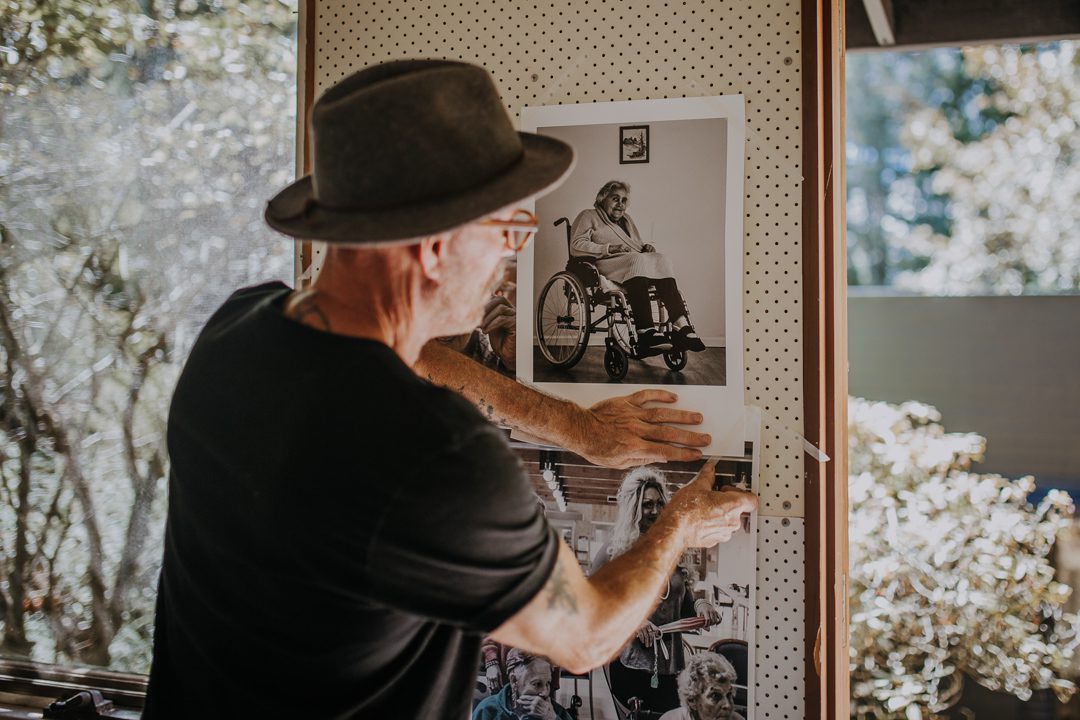 To create photographs that make an impact, Harold has always been prepared to go the extra mile. Shooting in the States for a group show called Others (Art Gallery of New South Wales, 2002), he had a loaded gun pointed at him by a volatile kid.  Harold kept his cool to capture that moment. The image was taken in the small Appalachian town in Kentucky where Harold’s sister lives. Since the rail line and prosperity passed it by, it’s almost a ghost town. “It’s a shocking photograph and at the same time, kind of mundane. This is regular life in Worthville. To me, that’s an important story to tell.” To date, it remains one of his most arresting images.

At about the same time Harold bought a small 1970s fibro house with a studio out back (yep, the Blackheath house that later became ours). With his commercial work ticking along in Sydney, he was coming up almost every weekend to take greater risks and make bolder, more personal work. “It was a timely move,” says Harold. His AGNSW show had caught the attention of Victoria Harbutt (then Senior Curator at Penrith Regional Gallery & The Lewers Bequest) and John Kirkman (then CEO) of Penrith Performing and Visual Arts (PP&VA), in Western Sydney bringing dynamic exhibitions, events and education programs to the community. “For the purposes of many arts grants, the Blue Mountains region is considered part of Western Sydney – there’s funding and a lot of great creative energy.” Harbutt invited Harold to collaborate.

Harold met Victoria in a cafe in Sydney’s Western suburbs to talk about ideas for a project. “We looked up from our pot of tea and realised almost everyone around us was wearing a tracksuit,” Harold recalls. “That’s not a coincidence. That’s cultural significance.” For The Tracksuits of St Mary’s project, Harold shot portraits of local people wearing their trackies with pride. In the back of his mind, Harold held the iconic image of the controversial medal ceremony at the 1968 Olympic Games in Mexico, where tracksuited American athletes Tommie Smith and John Carlos raised their fists in a black power salute. Since then, the tracksuit has been adopted by many underdogs and disenfranchised communities as a way of signalling solidarity and support for human rights. Harold’s not a tracksuit kinda guy, but it’s a very Harold agenda.

When The Tracksuits of St Mary’s exhibition was touring Japan, Harold was inspired by clothing again. His follow-up show, Uniform, featured large scale portraits of Japanese workers in their mandatory workgear, in a style that blurs reportage and glamour. There’s a similar tension in these two projects: they are both about fashion and anti-fashion. Harold’s portraits of working people in the utilitarian clothes they habitually wear are affectionate, respectful and joyous.

While Harold’s art work focuses on representing people on the fringes, much of his commercial work involves taking cover shots of famous faces for magazines like The Weekend Australian, Australian Financial Review’s Life and Leisure and InStyle. Sam Neill, Richard Roxborough, Chris Hemsworth, Celia Pacquola, Alan Jones, Barry Humphries, Tracey Spicer… Is it different shooting powerful influencers and regular joes? “Not a lot,” says Harold. “Either way, it’s about creating rapport. To be a good photographer you need to build trust as quickly as you can, so you can give your subject the confidence they need to relax and let you do your thing.” 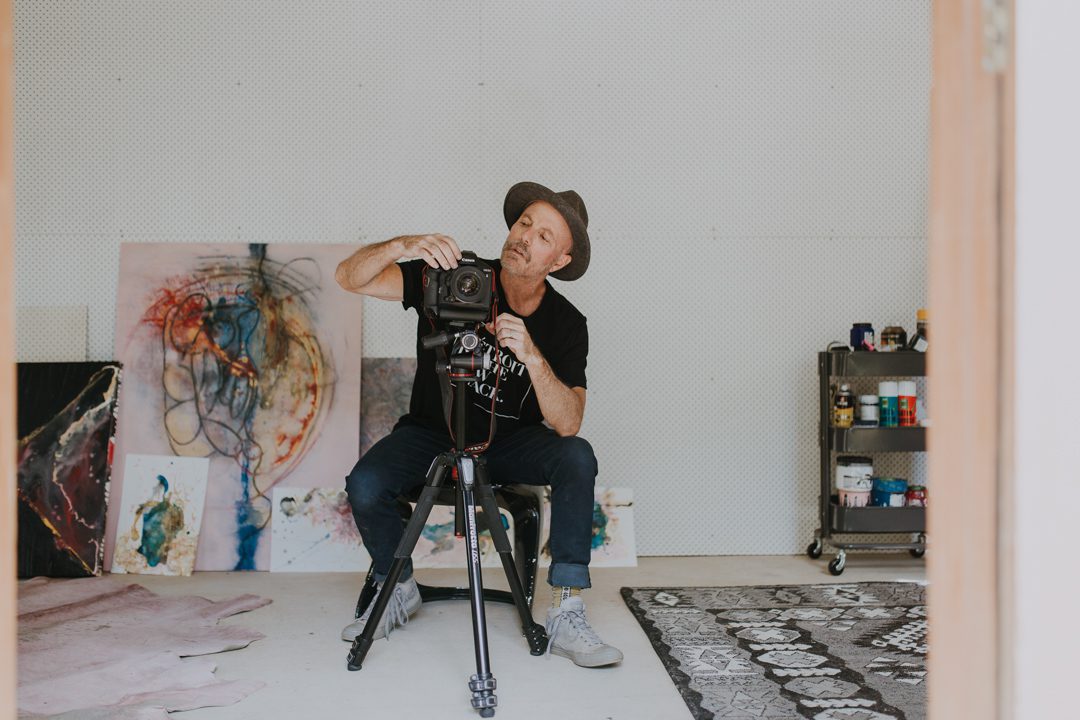 For Harold, shooting portraits for covers is the most satisfying part of being a commercial photographer. He counts himself lucky to be at a point where commissioning editors trust him, and give him creative license to do his best work.

One of Harold’s favourite portraits is of ex-PM Bob Hawke. The Honourable Bob Hawke savouring a strawberry milkshake won the People’s Choice in the National Photographic Portrait Prize 2018. “Bob walked in drinking a milkshake, and I had to seize the moment,” says Harold. What was the photo shoot like? “He was fun, cheeky even… He kept making me laugh.” Perhaps people love this image because it plays to a deep desire in our national psyche – a longing for leaders who feel like regular people, and who don’t take themselves too seriously. Like much of the work Harold is proudest of, his portrait of Hawkey reflects his democratic instincts and a confident playfulness. 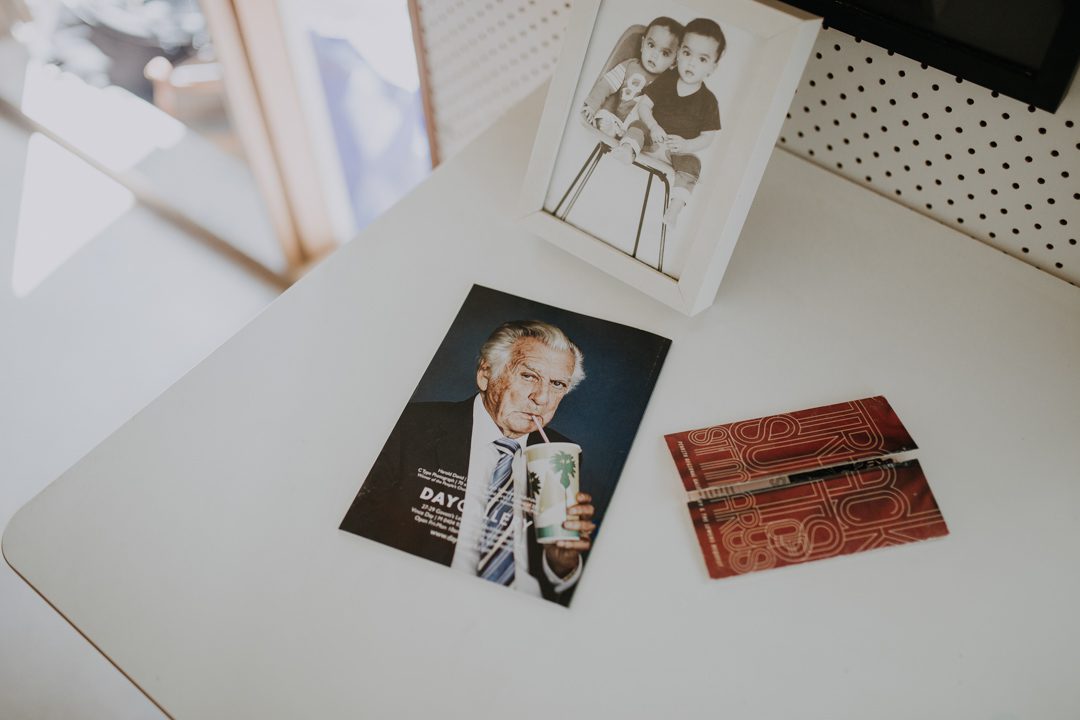 These qualities are front and centre in two more recent collaborations with I.C.E. Garage Barbershop was a project where self-taught barber Charles Lomu took on five Pacific Islander apprentices to teach them the art and culture of barbering. “They all had this gentlemanly masculinity,” says Harold, whose images capture their growth as they learn skills and develop connections with each other.

For The Motel Sisters in Care, Harold documented the ground-breaking artist-in-residence program, in which drag queens Tacky and Paris lived and worked at an aged care unit in Chester Hill. “I’ve never been more moved by a project in my life,” says Harold. “I didn’t like the colour of the walls or the light – it was a challenging shoot – but these are the most human photos I’ve ever done.” 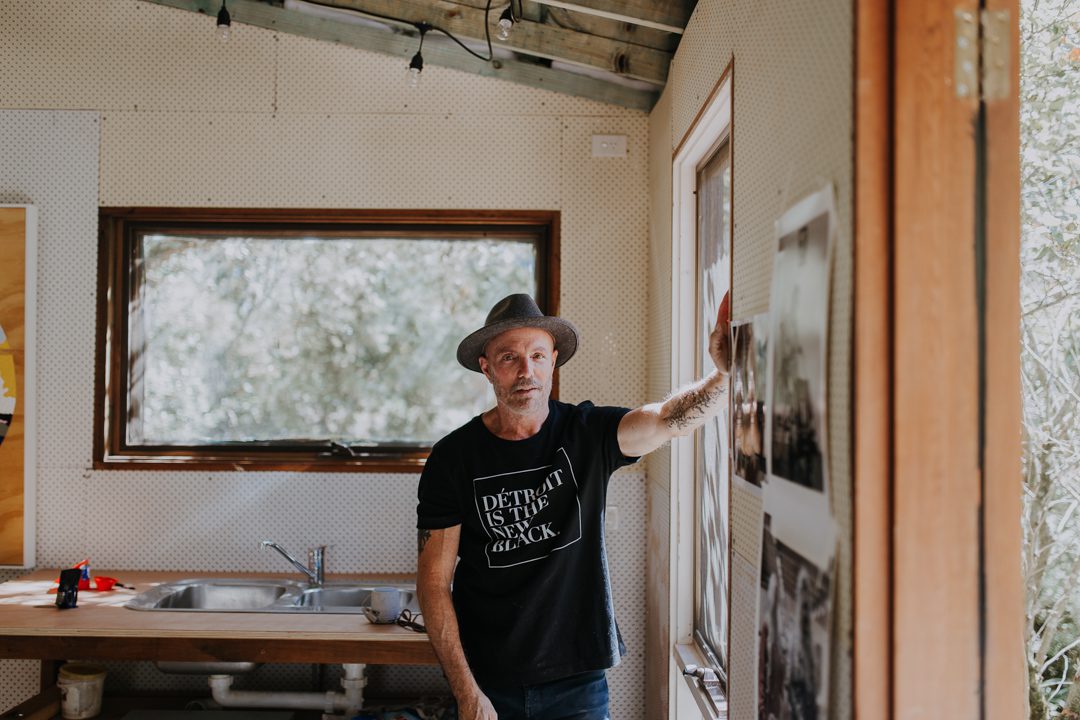 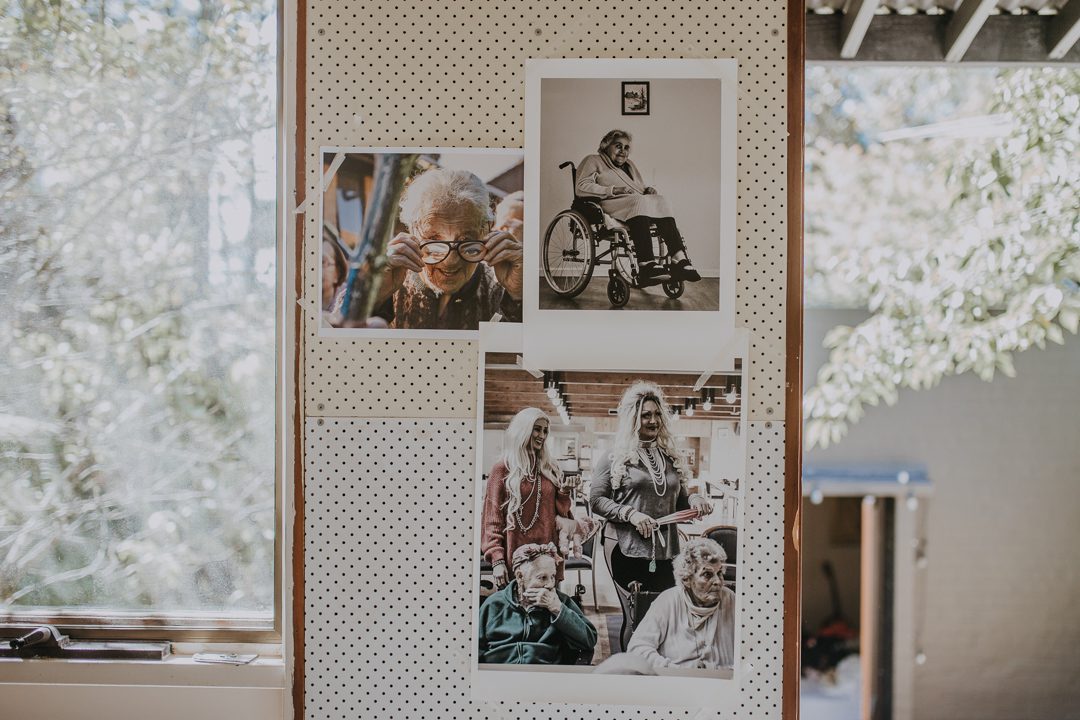 Harold moved back up to Blackheath with his partner and co-dad Andy Medina just a few years after the twins were born. “Coming back has felt like coming home,” he says. “And it’s a paradox, but being back in the mountains has made me feel safe enough to take creative risks.”

Inspired by heroes like fashion photographer-turned-painter David Bailey and Swedish abstractionist Hilma af Klint, Harold has begun to explore painting. How big a shift is that? “My photography skills inform some of the composition of my paintings,” says Harold, “but where photography represents forms, my paintings don’t. They are expressions of feeling states – human emotions.” 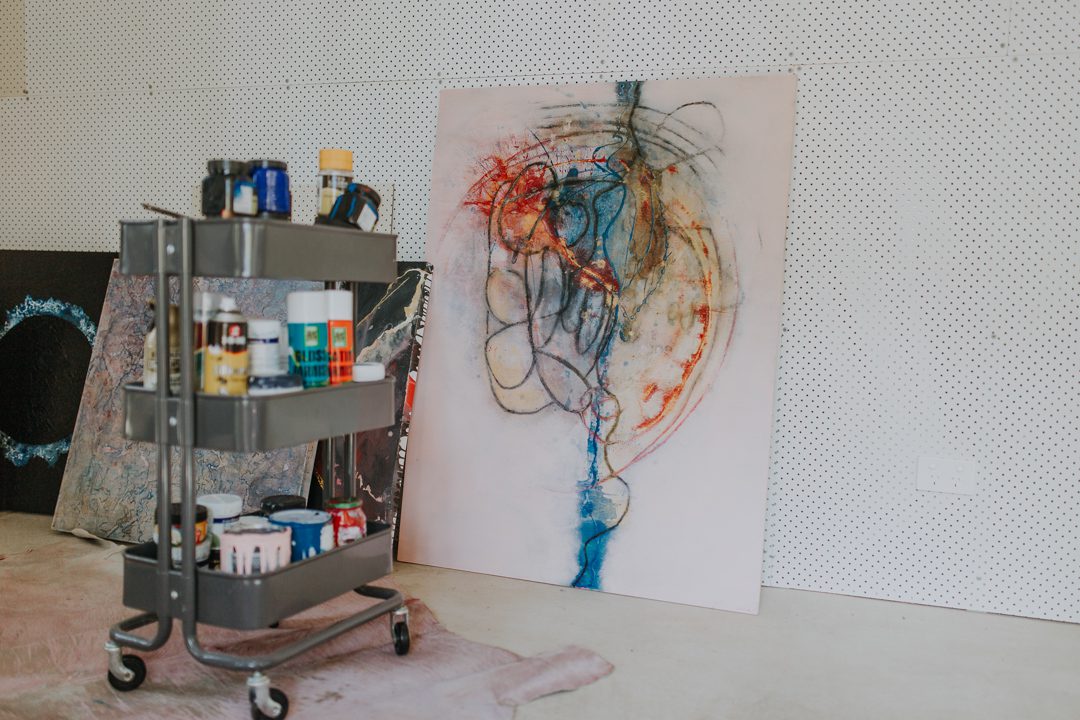 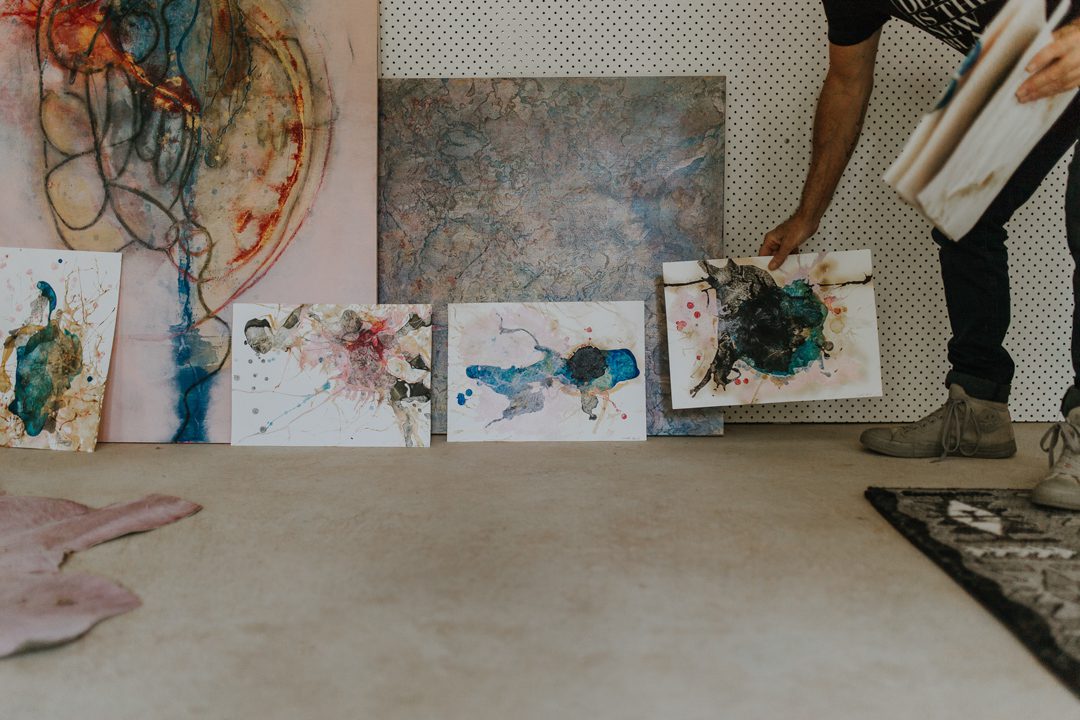 Harold has a simple philosophy that he lives and breathes: what matters is to grow, to stretch beyond the confines of the culture you were born into. It’s good to have Harold back in Blackheath, and to be able to watch his creative practice continue to evolve. 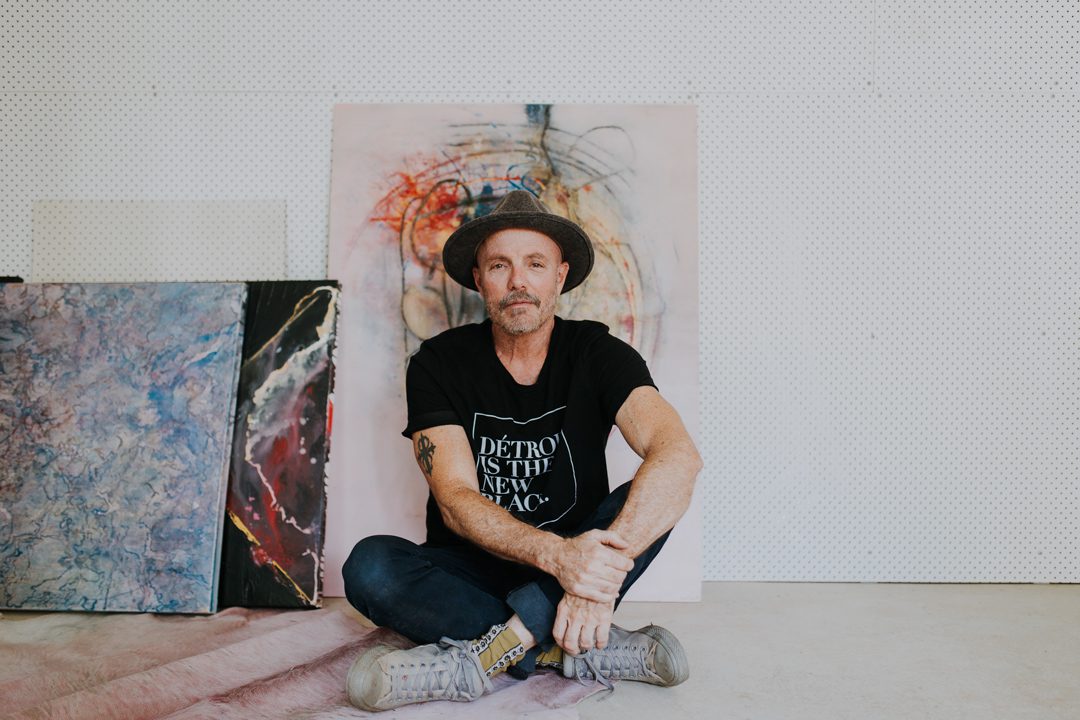 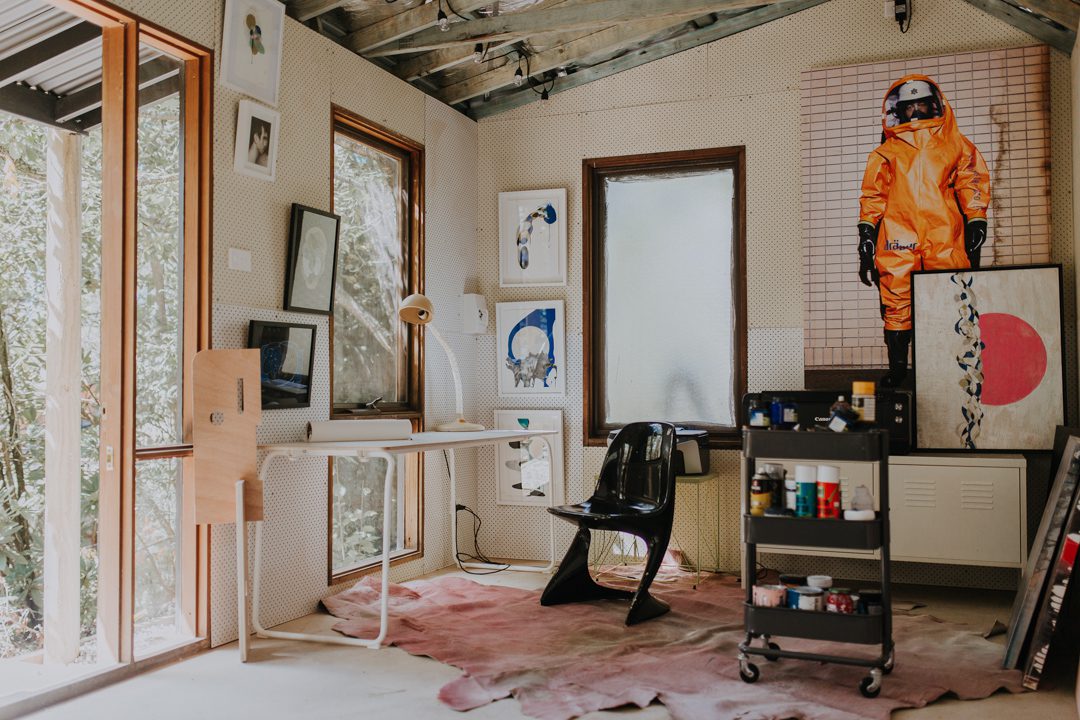 Correction: the printed version of this article in MTNS MADE Broadsheet III infers that Tracksuits of St Mary’s was a project of Information and Cultural Exchange  (ICE) in Parramatta. It was a Penrith Performing & Visual Arts commission.

John Kirkman and Victoria Harbutt were both PP&VA employees at that time – John was CEO and Victoria was a Senior Curator at Penrith Regional Gallery & The Lewers Bequest.