A Day in the life of Emma Magenta

A common refrain among those who live in the Blue Mountains is that their arrival here felt as though they had finally come home. For artist, author, and director, Emma Magenta, this is not too far from the truth. Emma spent much of her childhood visiting her grandfather, a ceramic artist in Blackheath. So when she moved to Medlow Bath in 2013 with her husband and two children she was in familiar surrounds. “The community was pretty embracing, pretty lovely,” says Emma. “I don’t think I ever even really entertained the idea of going back to the city after we arrived.” 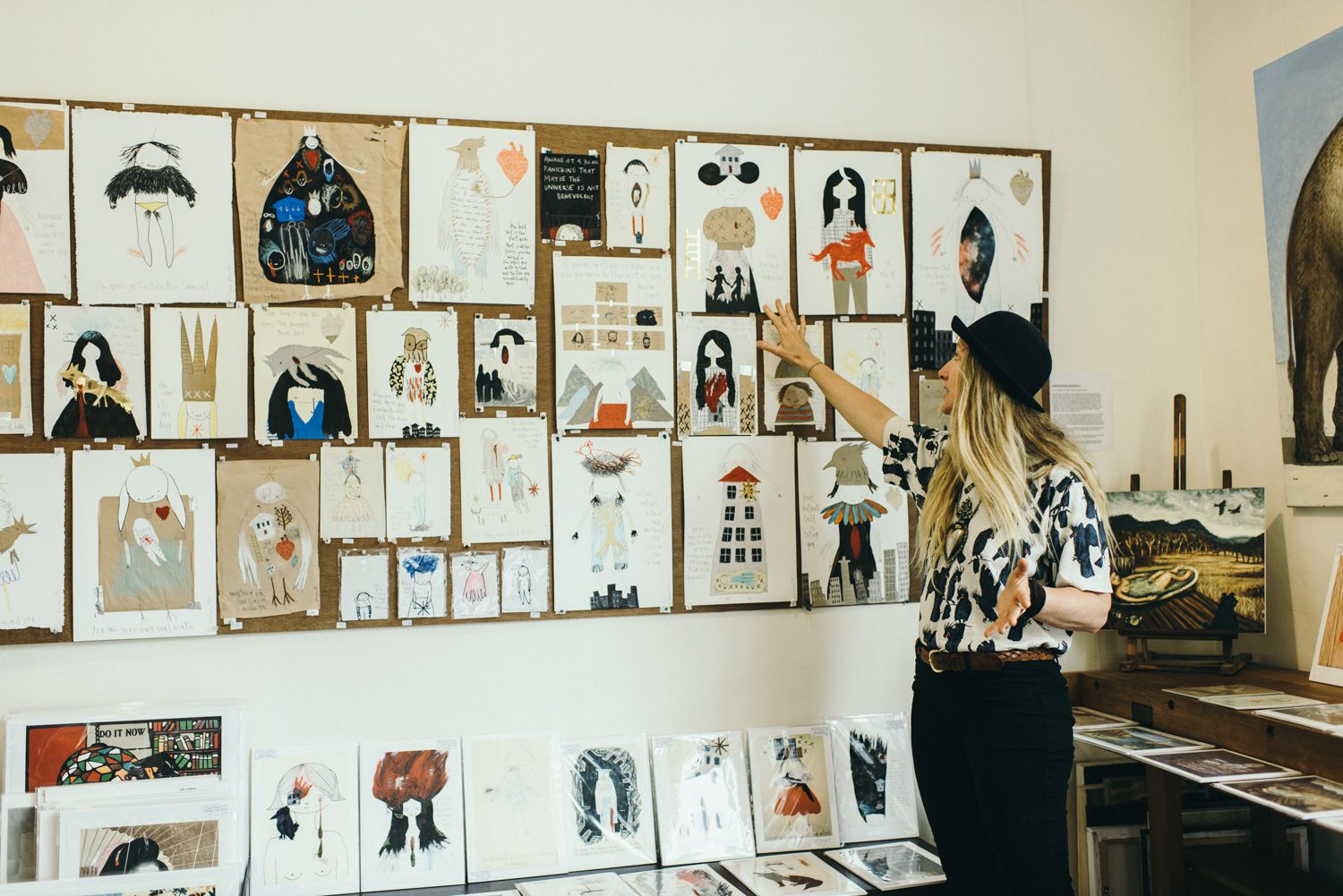 Emma’s life in the mountains is one filled with ritual, creative discipline, and joy. She begins each morning with her goal of not reaching immediately for her phone to check emails and social media. “I think once you set that path, the creative mind takes a back seat,” she explains. Instead, in a small but purposeful act of meditation, she takes a moment to appreciate the nearby forest from her bedroom window, and holds that moment of peacefulness as long as possible. 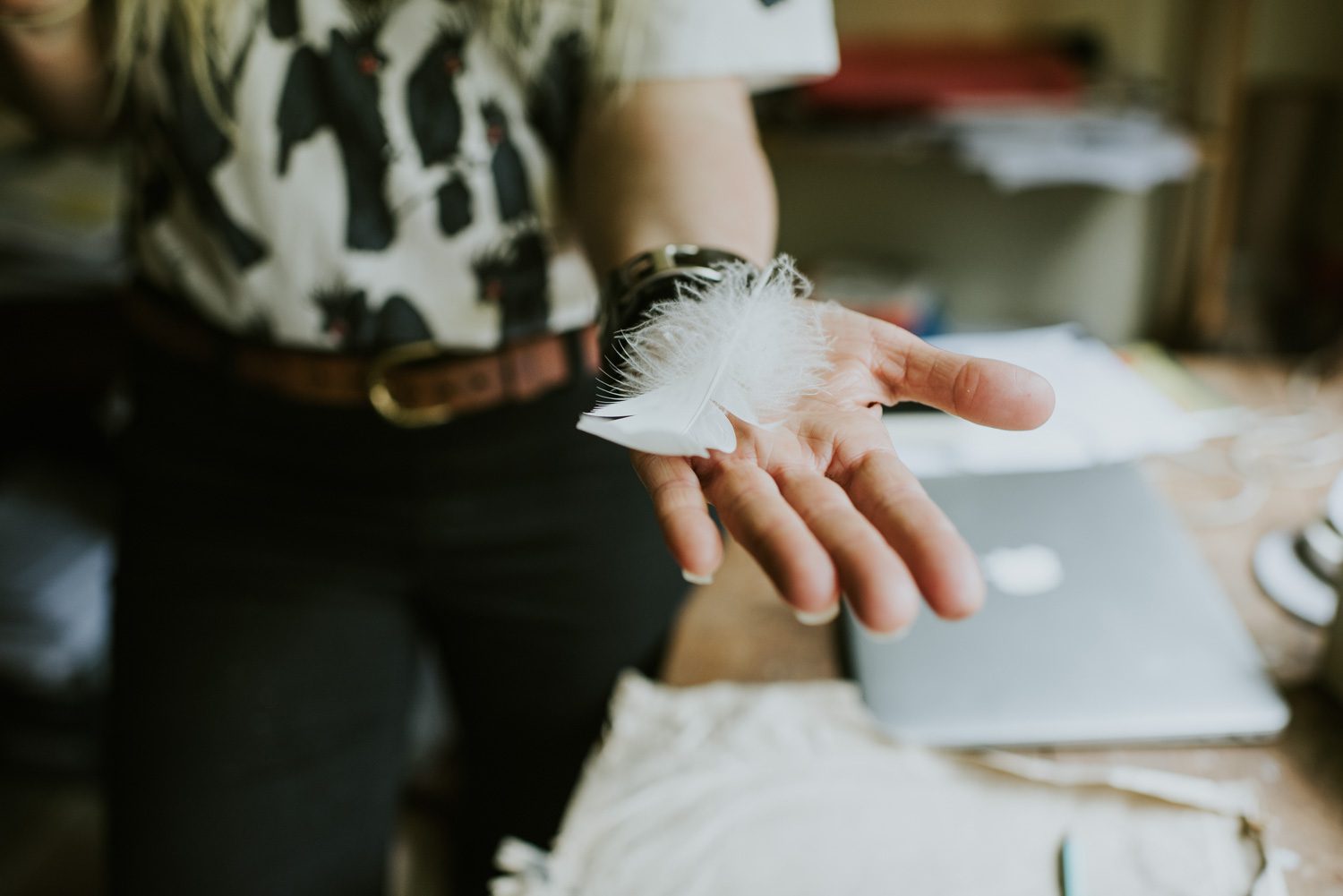 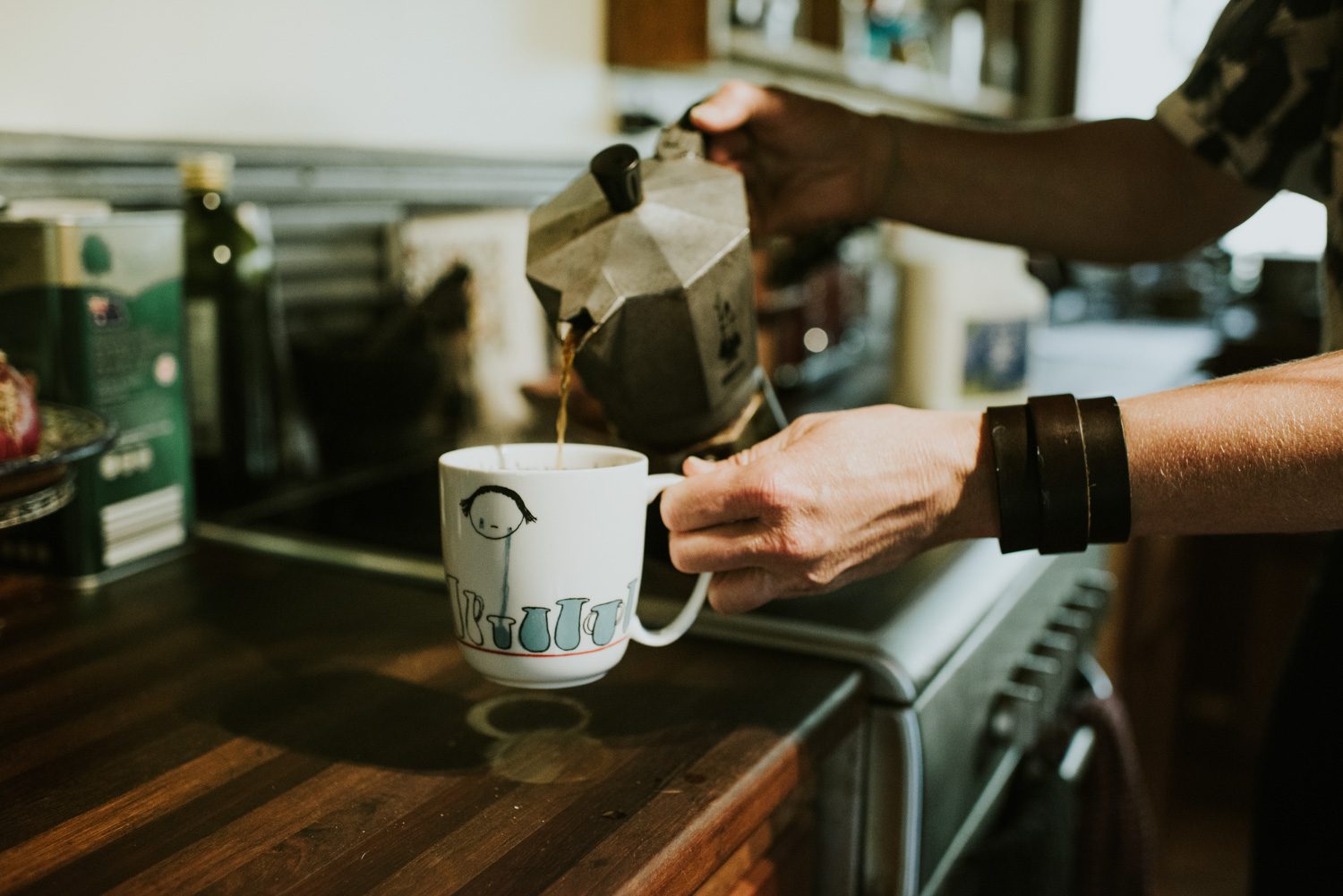 After a warm shower in the cool darkness of dawn, Emma enjoys a cup of tea while the morning breaks and chaos begins to enter with the family breakfast and getting her children ready for school. A successful morning sees her sail smoothly through this time, holding close her calm from earlier, avoiding any raised voices.

Emma finds that other people with busy creative lives understand her need for focus at times. “I’ve found the community to be incredibly supportive here,” says Emma. “People are very non-judgemental and we give each other the freedom and the room to just be themselves.” 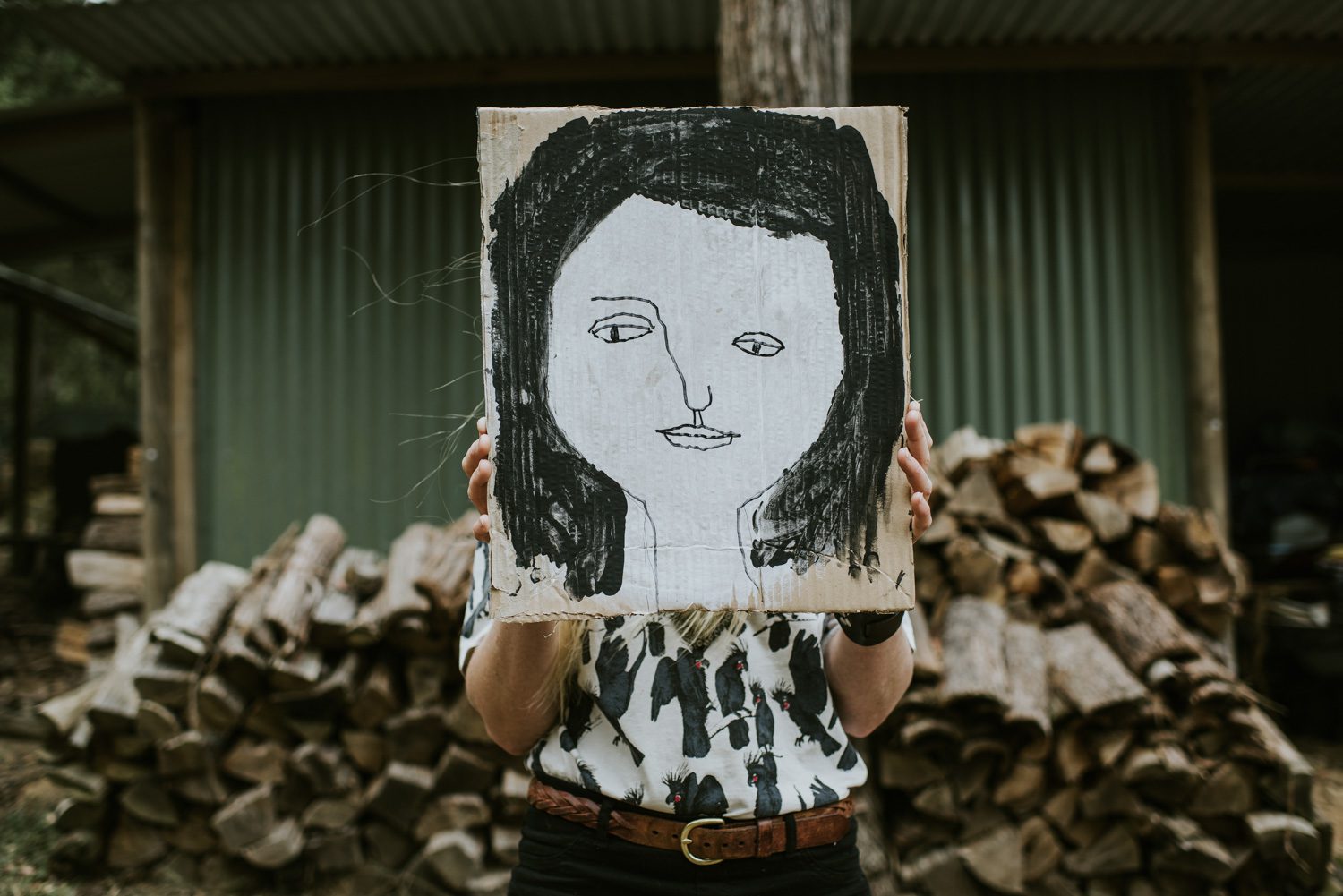 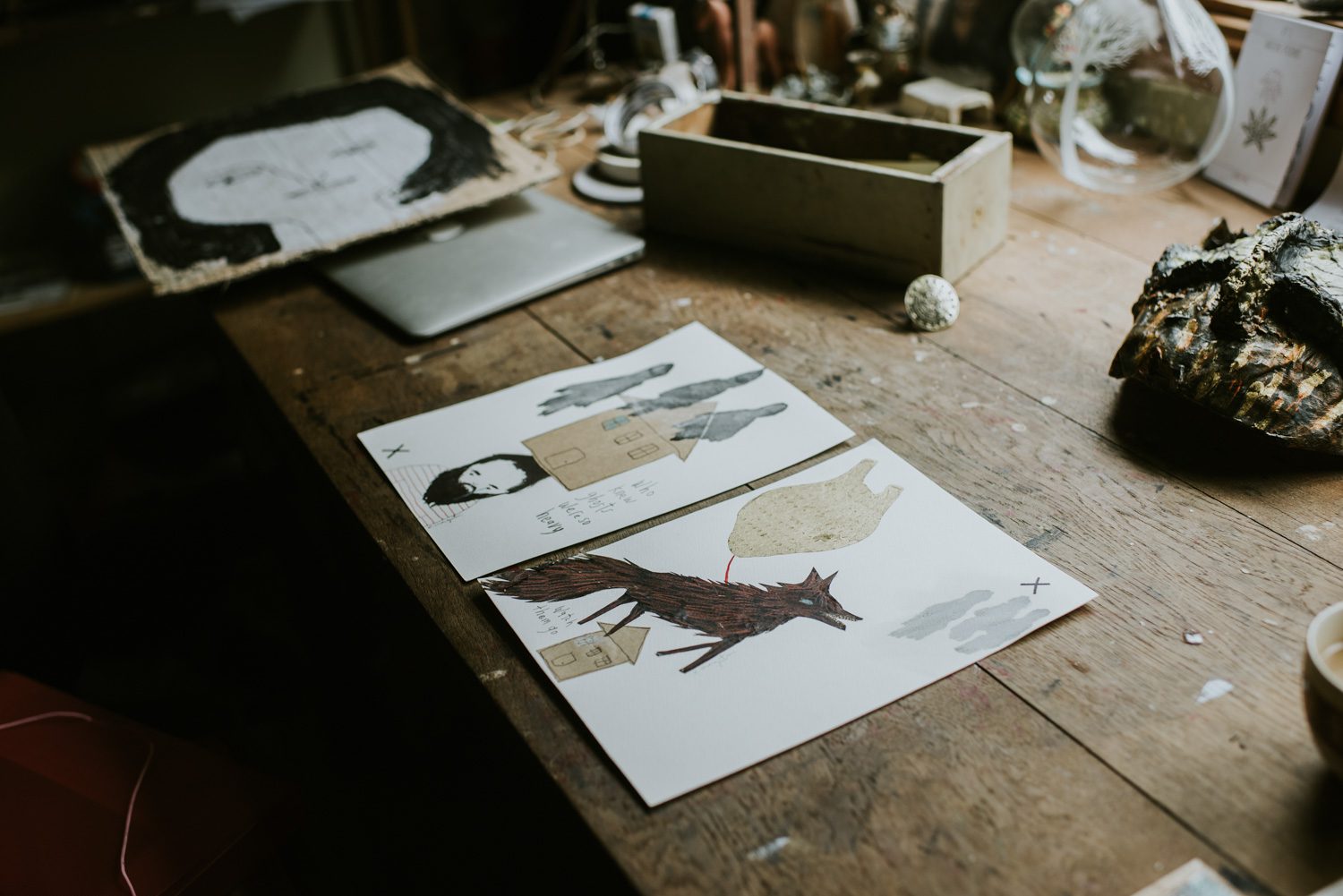 Then it is time to work. Recently Emma’s days have been filled with script writing for a short film scheduled to shoot and screen in 2017. Requiring quiet and focused attention, this new discipline has been a stimulating challenge. The film, Remembering Agatha, delves into magical realism to tell the story of a mother, overwhelmed by family obligation, who discovers a portal to her childhood self through the dishwasher. Set to debut at the Adelaide Film Festival, the hybrid live-action and animated film is a prologue to a television series with the ABC that will further explore issues to do with love and life as humans in the time of capitalism. 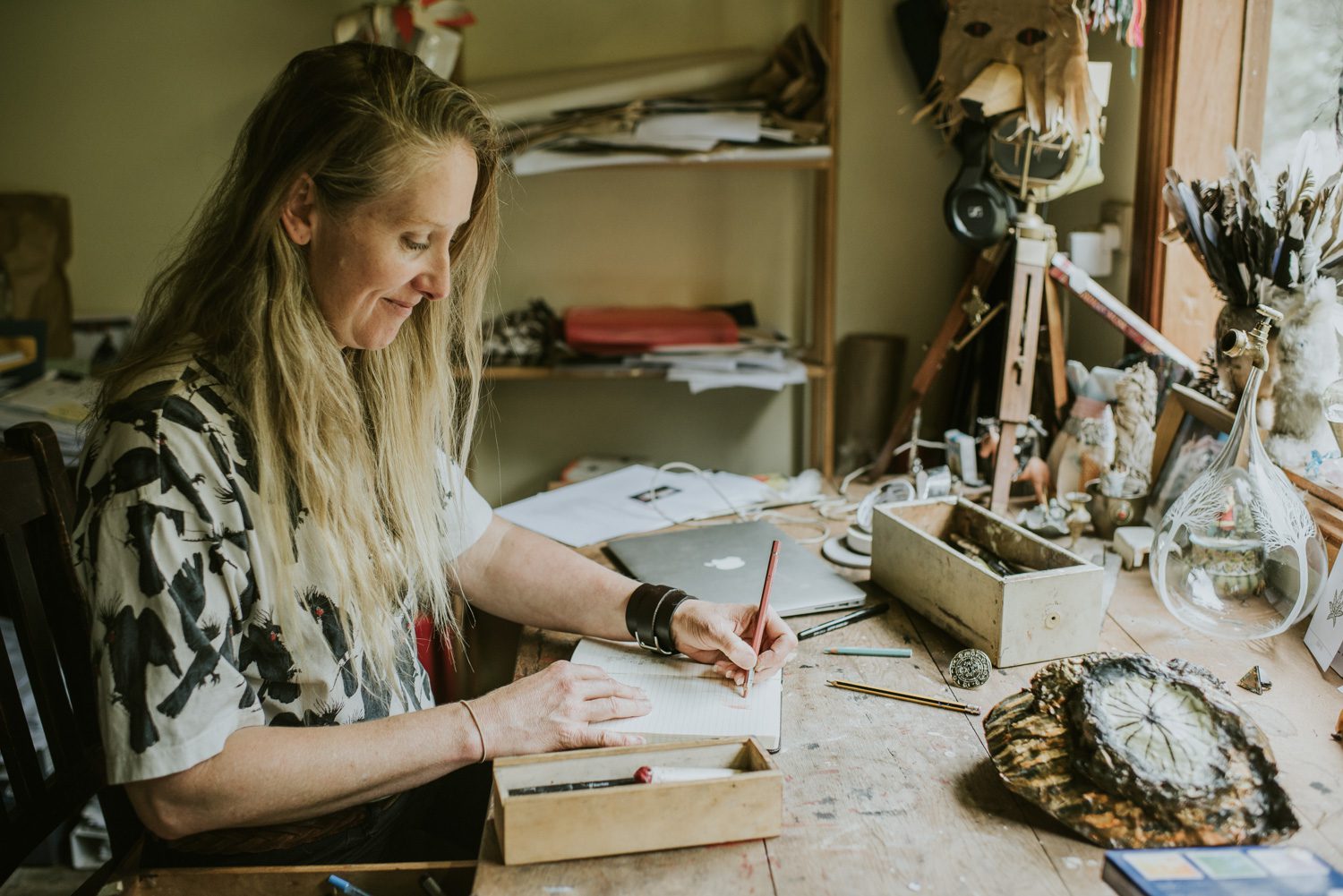 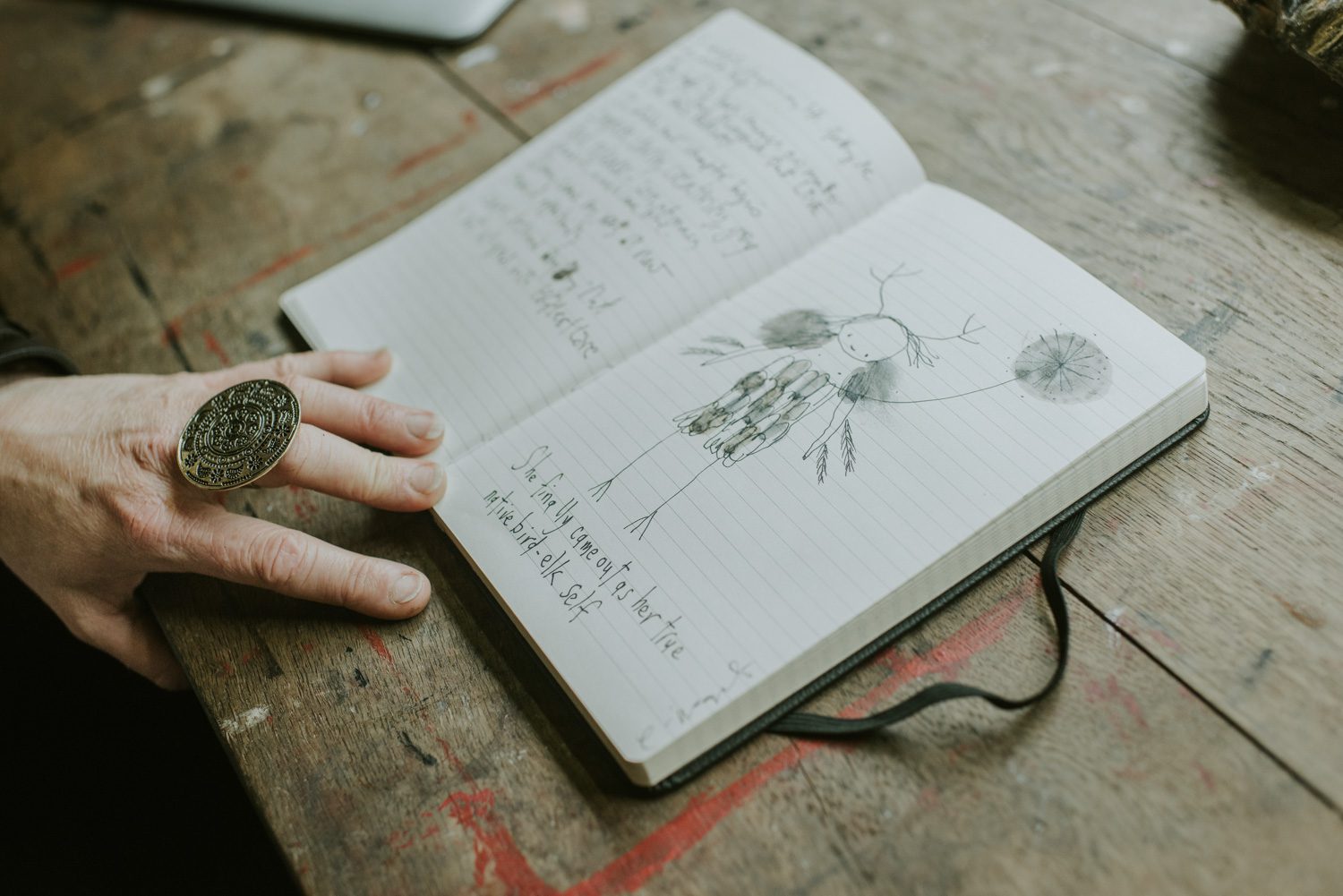 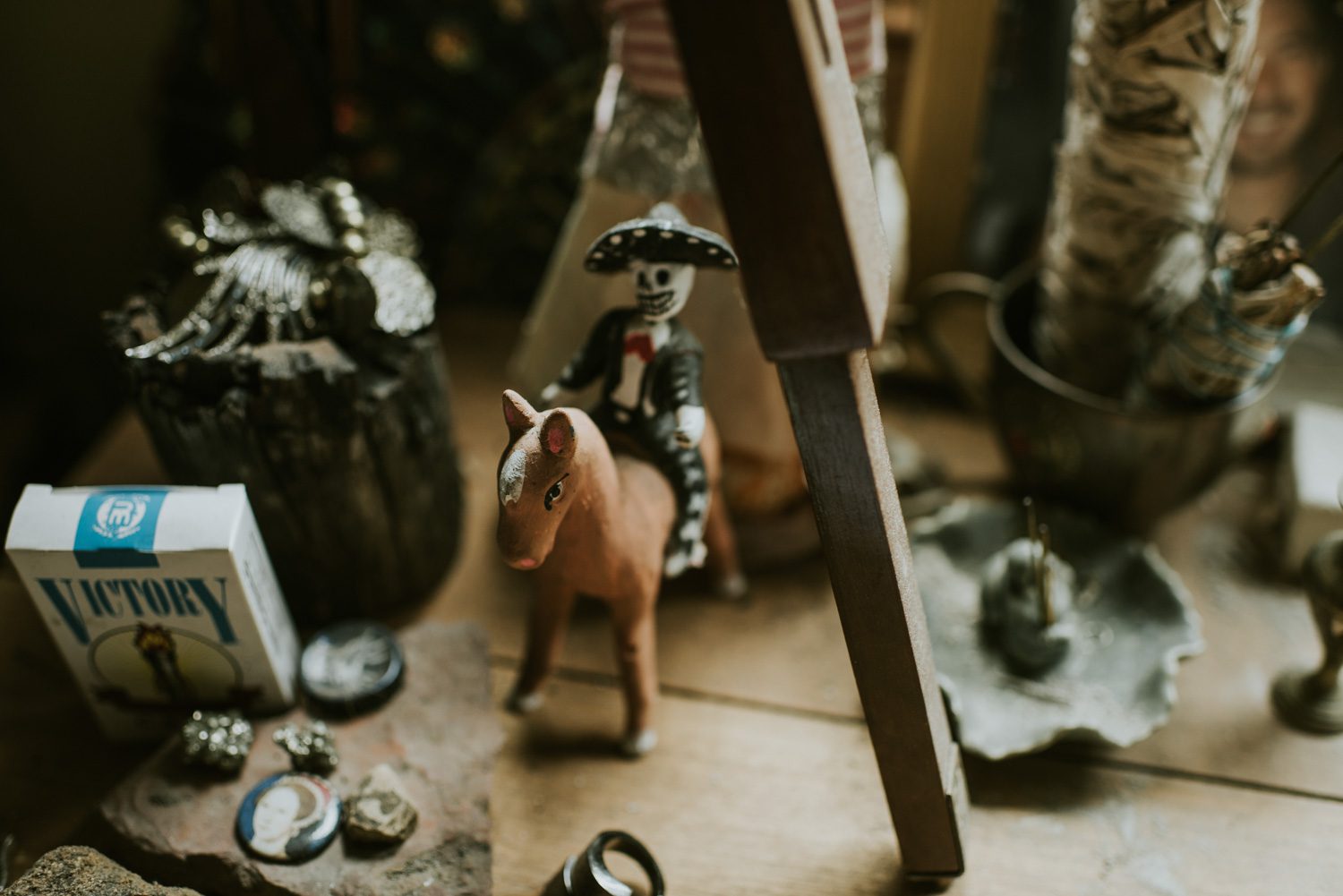 On other days, her schedule is less structured and she can be found in her studio, among a tangle of art supplies and collected curiosities, listening to music and producing new artworks. These vary in kind as Emma may be working on another picture book (she has written and illustrated several for adults as well as children), or her acclaimed animated television series, or creating art for exhibitions around the world. She is currently represented by Hat Hill Gallery in Blackheath. Regardless of the project, Emma’s illustrations are largely improvisational and she enjoys the focus and solitude that the mountains provide. With this appreciation she lovingly describes her home and studio in Medlow Bath as “a refuge within a refuge.”

Emma acknowledges that the move to the Blue Mountains prompted a reconsideration of not only the subject matter of her work, but also her approach to life. “When I got out of the city and arrived here, I started thinking – do we need to be this cynical? Is there something more beautiful that we can celebrate in art that doesn’t have to be about our tragedies? I think there’s actually a lot of humour that can come from our problems and our wounds.” 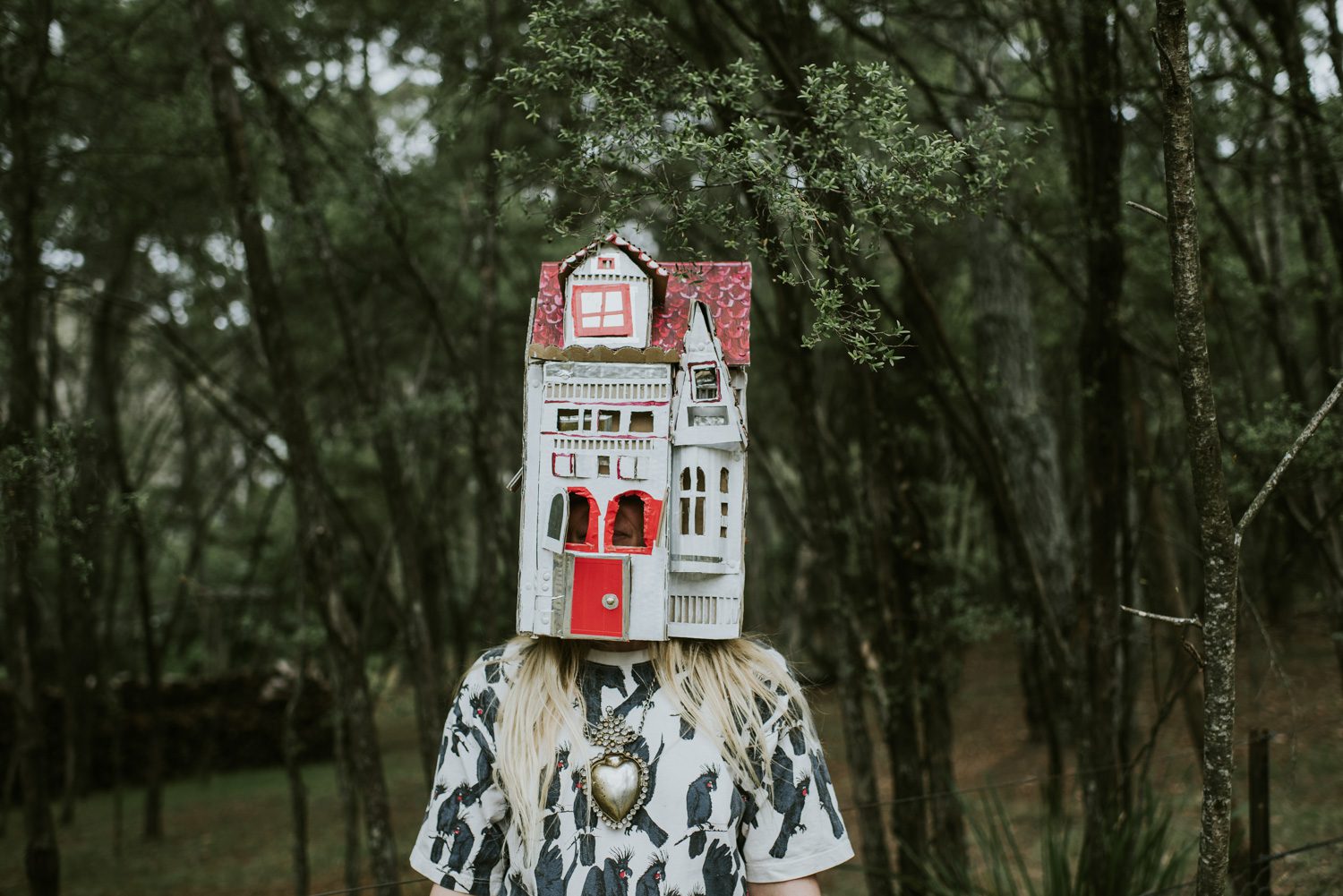 When the workday winds down, it is time to shift back into domestic mode, collect the children from school and settle into the evening routine. Dinner will be prepared either in the kitchen or the backyard around the fire pit. The children might eat while Emma casually works alongside them (dining with her partner a little later), or the entire family will eat together taking turns to tell stories about their day.

However, in the hustle of family life Emma always ensures to take some time for herself by enjoying an afternoon stroll through the bush. “This walk is my everyday happy place. I do it in the afternoon, and now that we’re on daylight saving time it’s glorious because I can do it later, but while it’s still light. The mood and atmosphere changes every time. Even though it’s the same walk, it’s always a different experience.”

Now a permanent and settled mountains resident, Emma reflects on how the mountains have imbued her life and work with new meaning. “There’s just something so magical about the land. We’re lucky to live here. Being here took away all the constructs of personality. It dissolved those things in my life and my art. Today, and what I’m moving towards is less of my personality as an artist, and more of the outcome of my investigations.” 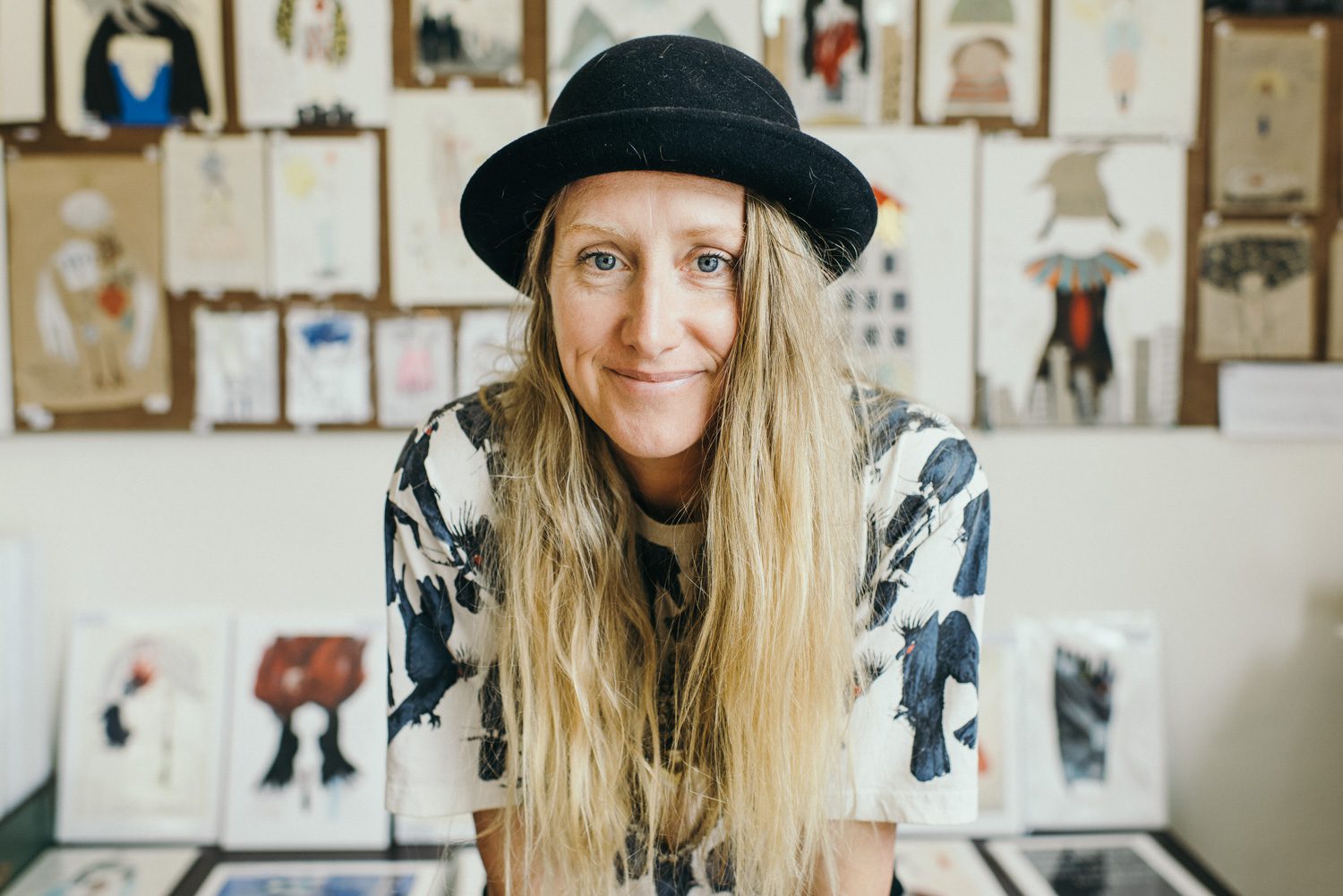